The New York Times, "The Photo That Exposed Segregation," by Amy Finnerty, published on 7 October 2011: In September 1957, Elizabeth Eckford and Hazel Bryan were captured in the sickening news photograph that prompted this book. Will Counts, a sharecropper’s son and young hire at The Arkansas Democrat, took the picture, laying bare the disgrace of the Jim Crow South. In it, Elizabeth, a sheltered, scholarly teenager in a homemade dress, walks past Little Rock Central High School while Hazel, a student there, marches behind her, spewing racist abuse.

The unassailable black martyr and the irredeemable white villain soon outgrew that narrative frame, however, maturing in ways inconvenient for a history lesson. David Margolick, a contributing editor at Vanity Fair whose books include “Strange Fruit: The Biography of a Song,” interviewed both women. In “Elizabeth and Hazel,” he provides a patient and evenhanded account of their messy relationship over the decades. 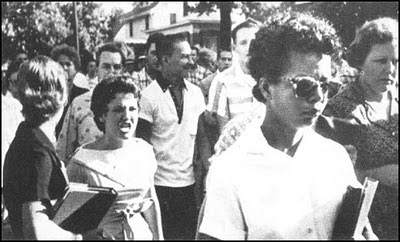 When the photo was taken, Central High was set to be desegregated, if only symbolically, in compliance with Brown v. Board of Education. One of the “Little Rock Nine” hand-selected for the mission, Elizabeth never made it into the building that day. A mob surrounded her. “Lynch her!” some hooted, while Gov. Orval Faubus’s National Guard kept the black students out of the school.

Hazel was a boy-crazy handful whose fundamentalist Christian parents had acquired indoor plumbing only a few years earlier. She “looked livid” that morning, “her face poisoned with hate” as she snarled, “Go home, nigger!” Elizabeth, by then terrified behind her dark glasses, kept walking. The members of the national press — visitors from another planet — were appalled.

As Little Rock boiled, President Dwight D. Eisenhower at last sent in the 101st Airborne Division to enforce the law. Hazel switched schools, but inside Central the unprotected Little Rock Nine were still being shoved in the halls and scalded in the showers, week after week. The following summer Elizabeth and her fellow foot soldiers, “potent fund-raisers for the N.A.A.C.P.,” toured the country as role models, but she was still reeling.

By the Kennedy era, Hazel Bryan Massery, a young wife and mother, had evolved. Mortified by the photo, she called Elizabeth to apologize. Elizabeth accepted, and Hazel went on trying to find herself — whether through belly-dancing or volunteering to help black kids.

After Central, Elizabeth had dropped out of college and spent five years in the Army. She eventually earned a history degree from Central State University in Ohio, and found work back in Little Rock. Wary of men, by 1980 she was a single mother of two sons and on disability for recurrent depression. Overwhelmed, she sometimes “couldn’t stand to be around her children,” we learn; they spent time in foster care. One of her sons, also depressed, would later be killed by police bullets after firing a weapon aimlessly in the street. Elizabeth, the author tells us, was often “morose and antisocial,” and received a diagnosis of post-traumatic stress disorder.

After a reporter tracked down Hazel in 1997, the women were reunited for a second photograph and a wave of publicity. They formed a fragile bond, attending a seminar on racial healing. “Elizabeth had never realized how paralyzed by anger and hate she had been,” Margolick writes. She was “better educated . . . far more cerebral than Hazel,” but Hazel was “better adjusted.”

A friendship developed, and the two women, exemplars of healing, were offered speaking engagements. Elizabeth thrived in a new career as a probation officer and received a Congressional Gold Medal in 1999. A joint book project was planned.

But as Elizabeth gained confidence and the women “shared more time and platforms,” she “spotted what she perceived to be gaps and . . . evasions, in Hazel’s story.” For example, Hazel refused to condemn her own parents for their bigotry.

“Elizabeth had always been a stickler. She saw things keenly and remembered things precisely,” Margolick notes. “The more Elizabeth got back on her feet, the more judgmental she became.” Ever the exacting history student and never one to read from a facile script, Elizabeth could not offer the unreserved forgiveness that a happy ending required.

Still, Elizabeth and Hazel seemed in sympathy when they appeared on “Oprah” together in 1999. They left the studio “feeling equally abused” by the show’s host, according to Margolick. In his telling, Oprah Winfrey was brusque, telegraphing her disapproval of any friendship between the women. She “had gone out of her way to be hateful, Elizabeth felt.”

Margolick proposes no fairy-tale resolutions to such moral impasses. To his credit, he spares us none of the unruly facts as his subjects, still wrestling with history, wander off message.
(source: New York Times, 7 Oct. 2011)
Posted by Ron at 6:10 PM