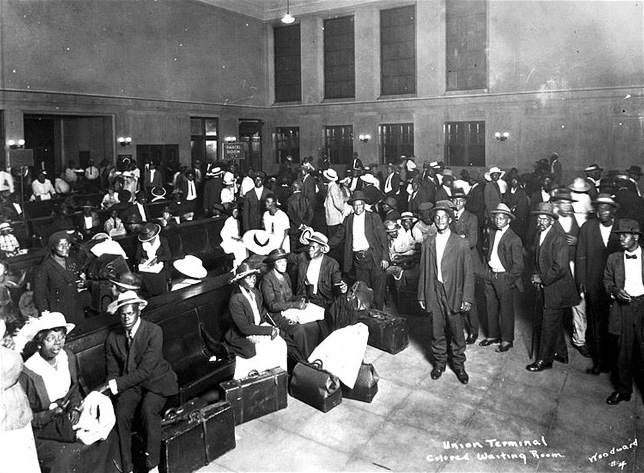 The Philadelphia Inquirer reported, "Black exodus from Southern segregation," on 24 October 2010, by Michael D. Schaffer: Half a century after the Civil War set African Americans free, another war gave them the chance finally to flee the brutal apartheid that had replaced slavery in the American South.
World War I disrupted the flow of immigrants from Europe to the United States, forcing industries in the North to begin looking for a new pool of cheap labor. They found it in the African Americans of the South, and sent recruiters into Dixie with a message of opportunity in the cities of the North.

The opportunity was more than just economic. It was a chance for a people, citizens but not fully free, to escape the system of legal segregation that demanded black deference to whites and often punished transgressions with death by lynching.

So began a migration that would long outlast the labor needs of World War I. For more than half a century, until the 1970s, millions of African Americans streamed out of the South toward the cities of the West and the North, including Philadelphia. Isabel Wilkerson tells their story superbly in The Warmth of Other Suns, a magnificent marriage of history and journalism. (The title phrase comes from a poem by the African American novelist and poet Richard Wright.)

"Over the course of six decades, some six million black southerners left the land of their forefathers and fanned out across the country for an uncertain existence in nearly every other corner of America," Wilkerson writes.

"The Great Migration would become a turning point in history. It would transform urban America and recast the social and political order of every city it touched. . . . It was the first mass act of independence by a people who were in bondage in this country for far longer than they have been free."

Beginning in the mid-1990s, Wilkerson, who won a Pulitzer Prize for feature writing as a reporter for the New York Times in 1994, interviewed more than 1,200 people, all of whom had been part of the migration.

She settled on three to carry her story: Ida Mae Gladney, who left the cotton fields of Chickasaw County, Miss., in 1937; George Starling, who fled central Florida in 1945, a step ahead of irate orange growers ready to lynch him for trying to organize pickers; and Robert Foster, a surgeon who packed up his Buick Roadmaster and set out for California in 1953.

Wilkerson, now a journalism professor at Boston University, retraced the journeys of her three main characters, including Foster's epic, nearly sleepless, drive across the vastness of the Southwest at a time when interstates didn't yet exist and public lodging for blacks was scarce.
Alternating among her characters, Wilkerson draws a reader into her narrative as she weaves a verbal tapestry, spun from beautifully turned phrases and rich in detail. Here is how she describes Milwaukee, Gladney's destination:
"Milwaukee was a frank and clattering workhorse of a town, a concrete smokestack of a place with trolley cars clanking against a web of power lines and telephone cables filling the sky. Curls of steam rose from the rooftops and from the gray hulk of the Schlitz brewery over by the Cherry Street bridge."

Relying on all those hours of meticulous interviewing, Wilkerson fleshes out her characters as completely as if they were characters in a novel: Gladney is the indomitable matriarch, Starling the upright and indignant man who pushes back against a racist society, and Foster the striver, anxious that his achievements be properly acknowledged.

In Foster, Wilkerson found an especially fascinating character, a skilled surgeon and compassionate healer of enormous ego and enormous insecurity, obsessed with status symbols, addicted to gambling, and eager for approval not just from whites but from his in-laws, pillars of black society in Atlanta. She clearly likes him and just as clearly sees his flaws:

"He had a Napoleon complex, a southern complex, a baby-of-the-family complex. He had both a superiority and an inferiority complex, and, because he was born on Christmas Day, a Christmas baby complex."

The world that the black newcomers found in the North was far from being a heaven of racial amity, but it was light-years better than what they had left behind in the South. For one thing, they could vote, as Ida Mae Gladney found to her surprise in 1940. Back in the South, she would never have ventured to the polls. If she had, Wilkerson writes, "she would have been turned away for failing to pay a poll tax or not being able to answer a question on a literary test for which there was no answer, such as how many grains of sand there were on the beach. . . ."

Wilkerson argues that historians have not paid sufficient attention to the Great Migration, that it was seismic but silent, unorganized and spread out over decades.

"It would become," she writes, "the biggest underreported story of the twentieth century."

Not any longer. (source: Philadelphia Inquirer)