The End Of Colonialism In Africa

THE 1950's The 1950's was a time of accelerated political change. At the end of the Second World War there were only three independent countries in Africa:
Libya was granted independence from Hitler's former ally, war-weary Italy. Egypt renounced its historic control over Sudan. Britain had little choice then but to grant full independence to Sudan in 1956. In the same year, Morocco and Tunisia became independent of France.

Leaders of Indian Nationalism, Ghandi and Nehru, 1948.
INFLUENCES: INDIA: The country which made the biggest impact on African nationalists was India which was led to independence by Mahatma Gandhi in 1947. His confident doctrine of nonviolence, and his track record battling racial prejudice in South Africa made him a hugely influential model among African nationalists. He was assassinated in January 1948. 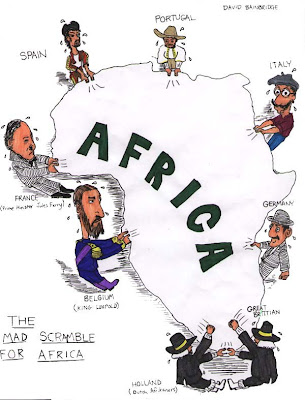 AFRICA & USA & SOVIET UNION: On the world stage America wanted an end to colonialism for reasons of free trade (easy access to African markets which had previously bought from Europe) and political influence. The Soviet Union wanted an end to colonialism and capitalism for reasons of ideology and to increase its sphere of influence.
While African nationalists took a pragmatic view of soviet style communism, the British government was concerned about the Soviet influence on Africa. And where African nationalists met with resistance or persecution from Europe, many welcomed the support and interest of the Soviet Union.

AFRICA & USA & SOVIET UNION: "…generally speaking, it is the detribalised native who responds best to communism, as he misses the narrow confines of tribal life and a leader on whom to bestow loyalty. This gives the Rand, with its inflow of immigrant labour, its special importance in the diffusion of communism in Africa…

Communism has made the least progress where the influence of Islam is strongest. Though in the past year the communist picture has been one of retrogression on some fronts, there are signs of increased interest in anti-colonialism from Moscow." --British Foreign and Colonial Office, Notes on the Aims, Strategy and Procedure of the Communists in Africa, 1 May 1950.
(source: BBC)
THE WIND OF CHANGE (the end of colonialism in africa) 1