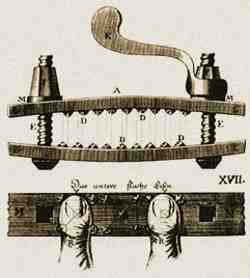 Now, people know what this contraption is? These are thumb screws. Thumbscrews are basically an instrument of torture.

They would be used on a slave ship in the aftermath, especially of an uprising, and insurrection in which the ring leaders would have their thumbs placed under the metal loops, the key turned producing a kind of pain that is almost indescribable from what I can learn of it.

Leaving a man in that condition for hours if not days and after which the thumb might have to be amputated. In his parliamentary testimony, John Newton said, “I have known slave ship captains to use thumbscrews that produce the most excruciating pain among the enslaved”.

I dare say he did know it because he himself had used them as he describes in his journal, and moreover folks, he used them on children on one occasion because he thought they had passed tools to the men through the gratings which they then used to get out of their irons and to try to rise up and capture the ship. (Talk given by Marcus Rediker in November 2007 at Merseyside Maritime Museum, Liverpool Museum) 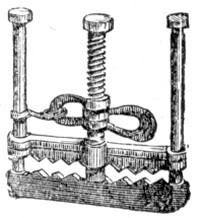 The thumbscrews or pilliwinks is a torture instrument which was first used in medieval Europe. It is a simple vice, sometimes with protruding studs on the interior surfaces. The victim's thumbs or fingers were placed in the vice and slowly crushed. The thumbscrew was also applied to crush prisoners' big toes. The crushing bars were sometimes lined with sharp metal points to puncture the nails and inflict greater pain in the nail beds. Larger, heavier devices based on the same design principle were applied to crush knees and elbows.
Posted by Ron at 7:03 AM