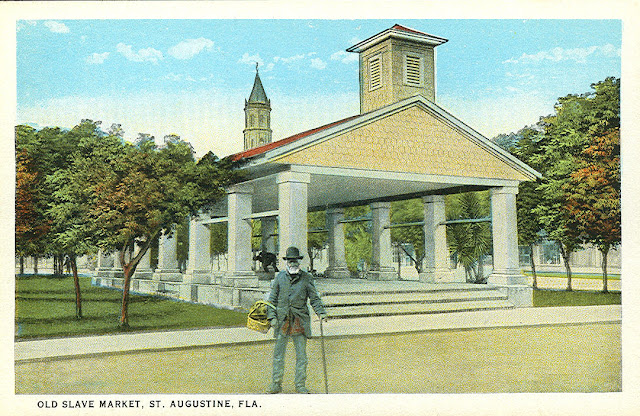 St. Augustine Record, on 2 December 2001, "St. Augustine once a hub of slave trade," by Margo Pope: ST. AUGUSTINE -- Four and a half centuries ago, St. Augustine was the hub of the slave trade in Spanish colonial Florida, a distinction that continued through the early 1800s. The slave trade was part of the city's economy from its founding in 1565, when Spanish explorer and founder Pedro Menendez de Aviles included black slaves among the New World's first Spanish settlers.

In fact, said St. Augustine historian Susan Parker, the Spanish Crown was one of the largest slaveholders, putting slaves to work on the city's defenses.

And, though many of the records from that period are lost, documents from the Catholic Church reveal slavery's deep roots in North Florida's history. In 1606, one year before the founding of Jamestown, Va., the first documented slave birth was recorded in St. Augustine. Agustin was baptized in the Catholic faith. He was the son of Agustin and Francisca, both listed as slaves in church baptismal records.

Church documents from what is called the First Spanish Period, 1565 to 1763, were taken from St. Augustine to Cuba in 1763 when the British occupied Florida. Some records were lost. But St. Augustine's main church, now called the Cathedral Basilica, has records dating to 1594.

Parker said church documents show how the royal government worked through slave owners to record slaves' marriages and births. "The Church is so prominent in this role," Parker said. 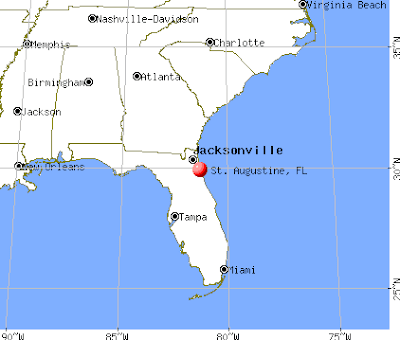 Parker said there are misconceptions regarding what early slavery was like in St. Augustine. Many people today have an image of slavery from movies about the pre-Civil War American plantations, she said. Though a plantation society did exist around St. Augustine in the 18th century, the first slaves, primarily from Africa, worked in Spanish households in town.

"In a lot of the homes, they did the hard tasks," Parker said."You would have a female domestic slave, a male slave for hard work but you wouldn't have slave quarters [as on plantations]."

And not all remained slaves. Fort Mose became the first town for free blacks in Spanish Florida, in 1738. Mose was then the northern defense outpost for St. Augustine. Those slaves who converted to Catholicism and worked at the fort were given their freedom. 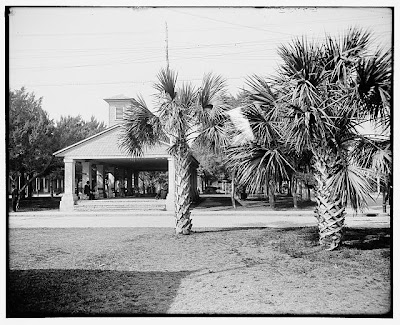 
From 1763 to 1783, when the British ruled Florida, more of a plantation society-style developed in St. Augustine. Historian Daniel Schafer said St. Augustine maintained its dominant position in the slave trade under British rule, but it did so with more of an economic and less of a domestic slant. Schafer is a professor of history at the University of North Florida and has studied the roots of slavery in Florida from its African origins.

In the 20-year occupation of St. Augustine by the British, slave ships regularly arrived, either after stopping in the American colonies or coming directly in from Africa.

As the British settled in East Florida, agricultural plantations were built apart from the center of town. British residents coming to Florida from the Carolinas and Georgia brought slaves with them to work in the fields. Florida's British Gov. James Grant had African slaves, but Lt. Gov. John Moultrie, Schafer said, had third-, fourth- and fifth-generation slaves born in America. 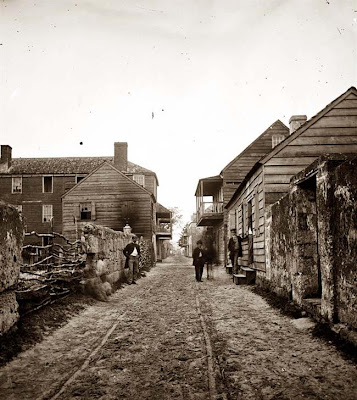 Principal slave suppliers to east Florida were South Carolinian Henry Laurens, who provided mostly African-born slaves, as well as John Graham of Savannah, Ga., and Richard Oswald of Scotland. Oswald, said Schafer, had a slave "factory" on Bance Island in what is now part of Sierra Leone, Africa. Oswald brought hundreds of slaves for his plantation near St. Augustine, as well as to sell to others.

Ships coming into the Port of St. Augustine would carry about 100 Africans at a time, Schafer said. The slave population of this period also included West Indies natives. 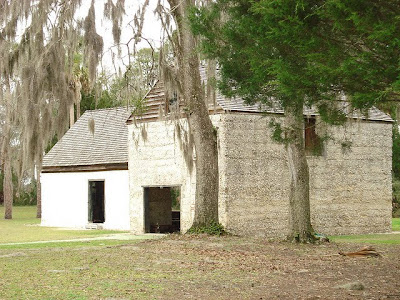 Slave buildings at the Kingsley Plantation, St. Augustine, FL The building on the right is made of crushed shells. It's also where the slaves undertook the dangerous and back-breaking task of processing the sugar cane.

Spanish rule returns  --  Spanish rule returned in 1784 and St. Augustine's slave center image remained. In fact, more than a quarter of the recorded population were slaves. According to a 1784 report by the Spanish governor back to Spain, St. Augustine recorded 574 black residents and 1,418 white residents, without distinction of free or slave. In 1797, the census recorded 1,007 white residents, 483 slaves and 102 free black residents.

By 1802, St. Augustine had been back under Spanish rule for almost 20 years. The slave trading business was changing worldwide as European countries, and the American colonies started banning the importation of African slaves. Spain did not.

"You have Liverpool, a center for the slave trade and all these ships from Africa there and suddenly, there is a ban," Schafer said. "So they pack up and head for [ports in] Fernandina and St. Augustine," he said.

The second Spanish occupation continued until 1821, when Spain transferred Florida to the United States. Parker said the slave culture in St. Augustine expanded because it not only included the slaves who returned with Spanish owners in 1784, but it still had some from the British period, African born and American born.

In this second Spanish period, she said, the slaves were also holding "jobs" when they are not working for their owners. This was an attempt to buy their freedom. They worked as butchers, seamstresses, rowers for boats. They held parties to sell products.

"Whatever they did, it took a long time," she said. "Most would have been paid only 1 1/2 to 2 pesos a day and the minimum to buy their freedom would have been about 400 pesos."

Parker said public slave sales likely were held on the steps of Government House at the opposite end of the town market on the Plaza de la Constitucion. But private sales also took place in town.

"They were private sales between owners and they may have been at the market to do other business when they did this," she said. (source: Florida Times Union)