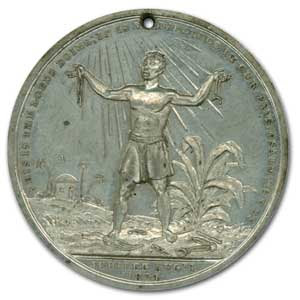 This medal was given to all school children in Tewkesbury schools in 1834 to celebrate the abolition of slavery in the British Empire.

This side depicts a freed slave with a radiant light shining upon him. His arms are raised to heaven and he holds broken manacles in his hands.

Under his feet is a broken whip and broken manacles lay on the ground around him. 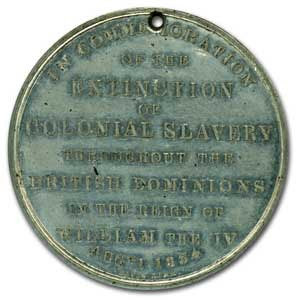 He stands by a broad leaf plant – either tobacco or sugar cane – and around the edge of the medal is verse 23 from psalm 118: ‘This is the Lord's doing; It is marvelous in our eyes’. In the background there is a hut and palm trees.

The centre top of the medal has a suspension hole so it can be worn. The other side of the medal has the following text: "In commemoration of the extinction of colonial slavery throughout the British Dominions in the reign of William the IV August 1, 1834".

The Slavery Abolition Act that outlawed slavery in British colonies was passed on August 23, 1833.

On August 1, 1834 all slaves in the British Empire were emancipated, but those still working were indentured to their former owners in an "apprenticeship" system, which was not abolished until 1838.

Slave owners received massive amounts of compensation, but the slaves received nothing. (source: Bolton Museum and Archive Service, UK)
Posted by Ron at 6:12 AM