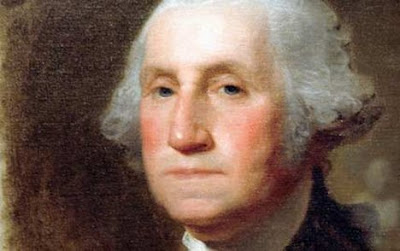 Fairfax County (Virginia) August 11, 1761:  Ran away from a Plantation of the Subscriber's, on Dogue Run in Fairfax, on Sunday the 9th Instant, the following Negroes, [1] viz.

Peros, 35 or 40 Years of Age, a well-set Fellow, of about 5 Feet 8 Inches high, yellowish Complexion, with a very full round Face, and full black Beard, his Speech is something slow and broken, but not in so great a Degree as to render him remarkable. He had on when he went away, a dark colour'd Cloth Coat, a white Linen Waistcoat, white Breeches and white Stockings. [2]

Jack, 30 Years (or thereabouts) old, a slim, black, well made Fellow, of near 6 Feet high, a small Face, with Cuts down each Cheek, being his Country Marks, his Feet are large (or long) for he requires a great Shoe: The Cloathing he went off in cannot be well ascertained, but it is thought in his common working Dress, such as Cotton Waistcoat (of which he had a new One) and Breeches, and Osnabrig Shirt. 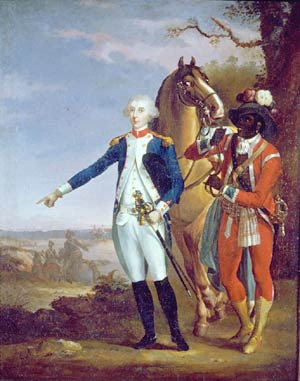 Neptune, aged 25 or 30, well set, and of about 5 Feet 8 or 9 Inches high, thin jaw'd, his Teeth stragling and fil'd sharp, his Back, if rightly remember'd, has many small Marks or Dots running from both Shoulders down to his Waistband, and his Head was close shaved: Had on a Cotton Waistcoat, black or dark colour'd Breeches, and an Osnabrig Shirt. [4]

Cupid, 23 or 25 Years old, a black well made Fellow, 5 Feet 8 or 9 Inches high, round and full faced, with broad Teeth before, the Skin of his Face is coarse, and inclined to be pimpley, he has no other distinguishable Mark that can be recollected; he carried with him his common working Cloaths, and an old Osnabrigs Coat made Frockwise.

The two last of these Negroes were bought from an African Ship in August 1759, [6] and talk very broken and unintelligible English; the second one, Jack, is Countryman to those, and speaks pretty good English, having been several Years in the Country. The other, Peros, speaks much better than either, indeed has little of his Country Dialect left, and is esteemed a sensible judicious Negro.

As they went off without the least Suspicion, Provocation, or Difference with any Body, or the least angry Word or Abuse from their Overseers, [7] 'tis supposed they will hardly lurk about in the Neighbourhood, but steer some direct Course (which cannot even be guessed at) in Hopes of an Escape: Or, perhaps, as the Negro Peros has lived many Years about Williamsburg, and King William County, and Jack in Middlesex, they may possibly bend their Course to one of those Places.

Whoever apprehends the said Negroes, so that the Subscriber may readily get them, shall have, if taken up in this County, Forty Shillings Reward, beside what the Law allows; and if at any greater Distance, or out of the Colony, a proportionable Recompence paid them, by

N.B. If they should be taken separately, the Reward will be proportioned.

Click here to see and enlargement of the original advertisment, printed in the Maryland Gazette (Annapolis), 20 August 1761

1. Dogue Run farm, or quarter, was one of the farms at Mount Vernon. The names of three of the four slaves whom GW lists here as runaways--Jack and Cupid on Dogue Run and Neptune on Williamson's farm, also at Mount Vernon--appear in GW's list of tithables in 1760. The names of all four appear in his list in 1761 two or three months before their attempted escape: Parros, Jack, and Cupid at Dogue Run and Neptune at Mount Vernon's River farm. Finally, three of the four are named in the list of slaves at Mount Vernon made in 1762 nearly a year after their running away: Jack at Home House farm, Parros at Dogue Run, and Cupid at Creek farm. See Memorandum: List of Tithables, c.May 1760, c.4 June 1761, and c. 9 June 1762, and notes 2, 3, 4, and 5.

2. See note 1. Parros (Paros, Peros) was a dower slave at Claiborne's in King William County. GW seems not to have brought him up to Mount Vernon before 1760; he is listed as being at Claiborne's in 1760-61 and does not appear on GW's list of tithables in Fairfax County in 1760. See Appendix F, in Settlement of the Daniel Parke Custis Estate, 20 April 1759-9 Nov. 1761. Parros's name continues to appear through 1764 on GW's list of tithables as a slave at Dogue Run, indicating that in 1764 or 1765 either he died or GW sold him or sent him to a plantation outside Fairfax County.

3. See note 1. There were four slaves named Jack on the Mount Vernon farms, in both 1760 and 1761: one of these was a house servant, two were at the Home House farm, and one Jack, the runaway, was on Dogue Run farm. The house servant was a dower slave called Mulatto Jack whom GW often used as a messenger. One of the two slaves on the Home House farm was called Cook Jack; he was a chief plowman and jack of all trades. In 1762, in the summer after the attempted escape, GW again lists four Jacks, one a house slave and the other three on Home House farm. Only three Jacks--Mulatto Jack, Cook Jack, and one other--appear on GW's list of tithables after 1763, and Mulatto Jack disappears from GW's list of tithables after 1765.

"Greenhouse Slave Quarters" - the sleeping area. In an 1838 interview, a former Mount Vernon slave is quoted as saying, "The sun never caught [George Washington] in bed, and he was unwilling it should find any of his people sleeping ...."

4. See note 1. Neptune's name does not appear among GW's tithables at Mount Vernon in 1762, but in GW's account with Joseph Davenport (Devenport), overseer at his Bullskin plantation in May 1765, GW notes having paid Davenport £3.7.3 for cash "pd Prison Fees in Maryld Neptune" (Ledger A, 210), and GW begins in 1766 again to list a Neptune in Fairfax County. Neptune's name appears on the 1774 list of tithables, the last that GW made before the Revolution, but it does not appear on his list of "all my Negroes . . . at Mount Vernon and the plantations around it" which he made in February 1786 (Diaries, 4:277-83).

5. See note 1. On 28 Jan. 1760 GW wrote in his diary, "Found the new Negroe Cupid ill of pleurisy at Dogue Run Quarter & had him brot. home in a Cart for better care of him." Two days later he noted, "Cupid was extreame Ill all this day and at Night when I went to Bed I thought him within a few hours of breathing his last," but on 31 Jan. he noted that Cupid "was somewhat better" (ibid., 1:230). Cupid is among the tithables at Mount Vernon through 1766, and the name appears again from 1771 through 1774. There was a dower slave at Bridge Quarter in York County at the time of the settlement of the Daniel Parke Custis estate, and it may have been he who had been brought up to Mount Vernon in the 1770s. The slave named Cupid that GW refers to in his diaries in 1786 was a dower slave, not the runaway of 1761 (see ibid., 4:281).

6. No reference to the purchase of these slaves appears in GW's cash accounts. GW must have kept a record of the purchase and sale of slaves in an account book that has been lost or destroyed.

7. The overseer for Dogue Run farm was John Foster and for River farm, Samuel Johnston, Junior.