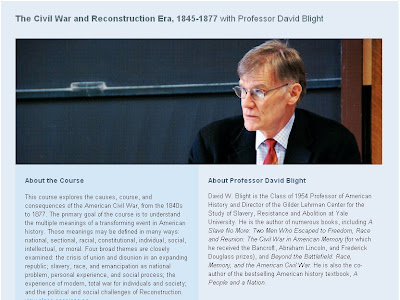 This course will explore the causes, course, and consequences of the American Civil War, from the 1840s to 1877. The primary goal of the course is to understand the multiple meanings of a transforming event in American history. Those meanings may be defined in many ways: national, sectional, racial, constitutional, individual, social, intellectual, or moral. We will especially examine four broad themes: the crisis of union and disunion in an expanding republic; slavery, race, and emancipation as national problem, personal experience, and social process; the experience of modern, total war for individuals and society; and the political and social challenges of Reconstruction. The course attempts, in several ways, to understand the interrelationships between regional, national, and African-American history. And finally, we hope to probe the depths of why the Civil War era has a unique hold on the American historical imagination.
Texts:

Bruce Levine, Half Slave and Half Free: The Roots of the Civil War. Hill and Wang.

Charles R. Dew, Apostles of Disunion: Southern Secession Commissioners and the Causes of the Civil War. University of Virginia Press.

Gary Gallagher, The Confederate War: How Popular Will, Nationalism, and Military Strategy Could Not Stave Off Defeat. Harvard University Press.

We are using two anthologies of documents (Gienapp and Johnson). Teaching Assistants will have discretion in assigning particular documents for each week's sections, and many such documents will be especially important for use in paper assignments. James McPherson's Battle Cry of Freedom: The Civil War Era is provided largely as background reading. For further background reading on the post-war period you may want to consult David W. Blight, Race and Reunion: The Civil War In American Memory.
Films:

Films will be scheduled during the course: especially several episodes of the PBS series, "The Civil War." The film, "Reconstruction: America's Unfinished Civil War," will also be assigned. Selections of Civil War era poetry may also be provided at times during the course.
Requirements:

There will be two required papers of 5-6 pages each. Choices of topics and readings will be provided in each of two broad categories or sections of the course: 1) antebellum society and Civil War causation; and, 2) the military, political, and social meanings of the Civil War itself. The challenges, accomplishments, and failures of the Reconstruction era will be a significant part of a scheduled, final examination during finals week.
Grading:

Yale University
Posted by Ron at 9:55 AM