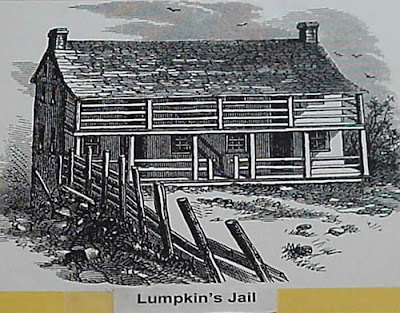 The place called Lumpkin's Slave Jail was indeed a jail, but it was much more than that. It was a holding pen for human chattel.

In Richmond's Shockoe Bottom river district, the notorious slave trader Robert Lumpkin ran the city's largest slave-holding facility in the 1840s and 1850s. Tens of thousands of blacks were held in the cramped brick building while they waited to be bought and sold. 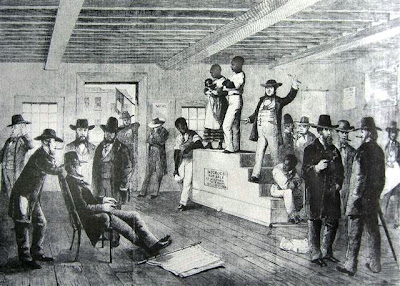 Those who resisted were publicly whipped.

"The individual would be laid down, his hands and feet stretched out and fastened in the rings, and a great big man would stand over him and flog him," a clergyman wrote after witnessing the punishment.

On Wednesday, black and white Richmond residents walked together across the rain-slicked cobblestones, excavated this month, that mark the outlines of the old slave jail. This former Confederate capital's announcement that Lumpkin's Jail had been found was the latest acknowledgment of its painful slave history.

Since Richmond's City Council formed the Slave Trail Commission in 1998, the city gradually has been unearthing and commemorating both the enslavement of blacks and their contributions to the city.

"This is a part of our history that was covered up for too long," said Charles Vaughan, a retired bus operator and commission member.

Richmond, which is 57 percent black, long has honored its Confederate past with monuments to Gen. Robert E. Lee, President Jefferson Davis and thousands of rebel soldiers. But only with its decadelong examination of the slave trail - which includes the jail, an adjoining Negro Burial Ground, and the slave marketplace and docks - has it shone a light on its dark legacy of slavery.

"It was hushed for so long," said Ana Edwards of the Sacred Ground Project, which erected an historical marker for the cemetery buried under a parking lot. "Slavery was not something anybody wanted to address."

Blacks called Lumpkin's Slave Jail "Devil's Half Acre." Some died there from abuse or disease. Thousands more were fed and groomed for sale at nearby slave markets, then sent by boat or rail to toil on farms and plantations throughout the Confederacy.

"They were literally sold down the river," said Philip Schwarz, a professor emeritus of history at Virginia Commonwealth University, standing a few feet from the jail site and gesturing toward the nearby James River.

From 1808, when the United States outlawed the international slave trade, to the end of the Civil War, an estimated 300,000 slaves were bought and sold in Richmond. Lumpkin, known as a "bully trader" for his harsh treatment of slaves, sold the men, women and children who became slaves in Southern states, where slavery remained legal.

Archaeologists discovered that Lumpkin's jail was actually a complex of brick buildings. In addition to the 20-by-41-foot, two-story jail, there was a kitchen, Lumpkin's residence and a boarding house where antebellum slave owners stayed while their slaves were readied for sale.

Digging through 15 feet of muck and fill dirt beneath a city-owned parking lot, archaeologists unearthed cobblestones and brick drains that formed the jail's perimeter. The jail was torn down in the 1870s.

"We're standing on a time capsule of Richmond's history," Matthew Laird, an archaeologist on the dig, said as he led commission members across the waterlogged site. "It's exciting to find such an intact and well-preserved site."

Because of the Slave Trail and the commemoration of "this infamous jail," McQuinn said, "generations to come won't have to do as much work to find out who they are and where they came from."

Kathleen Kilpatrick, director of the state Department of Historic Resources, said the jail has national significance. She called it "ground zero" for understanding the slave trade.

When Robert Lumpkin died, he left his jail to his widow - Mary Lumpkin, a black woman and former slave. In 1867, she gave the property to a minister who established a school for freed slaves.

Over the years, the school evolved into what is now Virginia Union University, a historically black college. (source LA Times)
Posted by Ron at 9:13 PM