"Runaways and slave hunters in the Dismal Swamp, " by Frederick Law Olmsted, A Journey in the Seaboard Slave States: with Remarks on Their Economy (1856), pp. 160–162.

While driving in a chaise from Portsmouth to Deep-river, I picked up on the road a jaded looking negro, who proved to be a very intelligent and good-natured fellow. His account of the lumber business, and of the life of the lumbermen in the swamps, in answer to my questions, was clear and precise, and was afterwards verified by information obtained from his master.

He told me that his name was Joseph, that he belonged to a church in one of the inland counties, and that he was hired out by the trustees of the church to his present master. He expressed entire contentment with his lot, but showed great unwillingness to be sold to go on to a plantation. He liked to “mind himself,” as he did in the swamps. Whether he would still more prefer to be entirely his own master, I did not ask.

The Dismal Swamps are noted places of refuge for runaway negroes. They were formerly peopled in this way much more than at present; a systematic hunting of them with dogs and guns having been made by individuals who took it up as a business about ten years ago. Children were born, bred, lived and died here. Joseph Church told me he had seen skeletons, and had helped to bury bodies recently dead. There were people in the swamps still, he thought, that were the children of runaways, and who had been runaways themselves all their lives. What a life it must be; born outlaws; educated self-stealers; trained from infancy to be constantly in dread of the approach of a white man as a thing more fearful than wild-cats or serpents, or even starvation.

There can be but few, however, if any, of these “natives” left. They cannot obtain the means of supporting life without coming often either to the outskirts to steal from the plantations, or to the neighborhood of the camps of the lumbermen. They depend much upon the charity or the wages given them by the latter. The poorer white men, owning small tracts of the swamps, will sometimes employ them, and the negroes frequently. In the hands of either they are liable to be betrayed to the negrohunters. Joseph said that they had huts in “back places,” hidden by bushes, and difficult of access; he had, apparently, been himself quite intimate with them. When the shingle negroes employed them, he told me, they made them get up logs for them, and would give them enough to eat, and some clothes, and perhaps two dollars a month in money. But some, when they owed them money, would betray them, instead of paying them.

“But some on ‘em would rather be shot than be took, sir,” he added, simply.

A farmer living near the swamp confirmed this account, and said he knew of three or four being shot in one day.

No particular breed of dogs is needed for hunting negroes: and one white man told me how they were trained for it, as if it were a common or notorious practice. They are shut up when puppies, and never allowed to see a negro except while training to catch him. A negro is made to run from them, and they are encouraged to follow him until he gets into a tree, when meat is given them. Afterwards they learn to follow any particular negro by scent, and then a shoe or a piece of clothing is taken off a negro, and they learn to find by scent who it belongs to, and to tree him, etc. I don’t think they are employed in the ordinary driving in the swamp, but only to overtake some particular slave, as soon as possible after it is discovered that he has fled from a plantation. Joseph said that it was easy for the drivers to tell a fugitive from a regularly employed slave in the swamps. 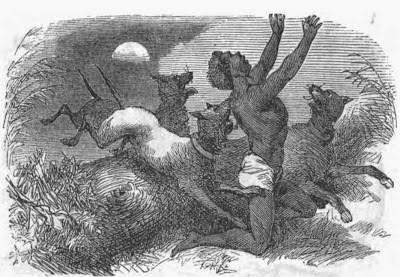 “How do they know them?”

“Skeared like, you know, sir, and kind ‘o strange, cause dey hasn’t much to eat, and ain’t decent [not decently clothed], like we is.”

When the hunters take a negro who has not a pass, or “free papers,” and they don’t know whose slave he is, they confine him in jail, and advertise him. If no one claims him within a year he is sold to the highest bidder, at a public sale, and this sale gives title in law against any subsequent claimant ... [Frederick Law Olmsted, A Journey in the Seaboard Slave States: with Remarks on Their Economy (1856), pp. 160–162.]