From the Gilder Lehrman Institute of American History at Yale University, "Slave Children of New Orleans, 1863," by Charles Paxson  --  Photographs of emancipated children were sold to raise money for the education of freed slaves in New Orleans. The children featured in this photograph drew attention to the fact that slavery was not solely a matter of color. If a child’s mother was a slave, then he or she was a slave as well.

The following article appeared in Harper’s Weekly on January 30, 1864. The short biographies contained in the article offer us a rare (and possibly unique) record of slave children.


The group of emancipated slaves whose portraits I send you were brought by Colonel Hanks and Mr. Phillip Bacon from New Orleans, where they were set free by General Butler. Mr. Bacon went to New Orleans with our army, and was for eighteen months employed as Assistant-Superintendent of Freedmen, under the care of Colonel Hanks. He established the first school in Louisiana for emancipated slaves, and these children were among his pupils. He will soon return to Louisiana to resume his labor. Rebecca Huger is eleven years old, and was a slave in her father’s house, the special attendant of a girl a little older than herself. To all appearance she is perfectly white. Her complexion, hair, and features show not the slightest trace of negro blood. In the few months during which she has been at school she has learned to read well, and writes as neatly as most children of her age. Her mother and grandmother live in New Orleans, where they support themselves comfortably by their own labor. The grandmother, an intelligent mulatto, told Mr. Bacon that she had “raised” a large family of children, but these are all that are left to her.

Charles Taylor is eight years old. His complexion is very fair, his hair light and silky. Three out of five boys in any school in New York are darker than he. Yet this white boy, with his mother, as he declares, has been twice sold as a slave. First by his father and “owner,” Alexander Wethers, of Lewis County, Virginia, to a slave-trader named Harrison, who sold them to Mr. Thornhill of New Orleans. This man fled at the approach of our army, and his slaves were liberated by General Butler. The boy is decidedly intelligent, and though he has been at school less than a year he reads and writes very well. His mother is a mulatto; she had one daughter sold into Texas before she herself left Virginia, and one son who, she supposes, is with his father in Virginia. These three children, to all appearance of unmixed white race, came to Philadelphia last December, and were taken by their protector, Mr. Bacon, to the St. Lawrence Hotel on Chestnut Street. Within a few hours, Mr. Bacon informed me, he was notified by the landlord that they must therefore be colored persons, and he kept a hotel for white people. From this hospitable establishment the children were taken to the “Continental,” where they were received without hesitation.

Wilson Chinn is about 60 years old, he was “raised” by Isaac Howard of Woodford County, Kentucky. When 21 years old he was taken down the river and sold to Volsey B. Marmillion, a sugar planter about 45 miles above New Orleans. This man was accustomed to brand his negroes, and Wilson has on his forehead the letters “V. B. M.” Of the 210 slaves on this plantation 105 left at one time and came into the Union camp. Thirty of them had been branded like cattle with a hot iron, four of them on the forehead, and the others on the breast or arm. 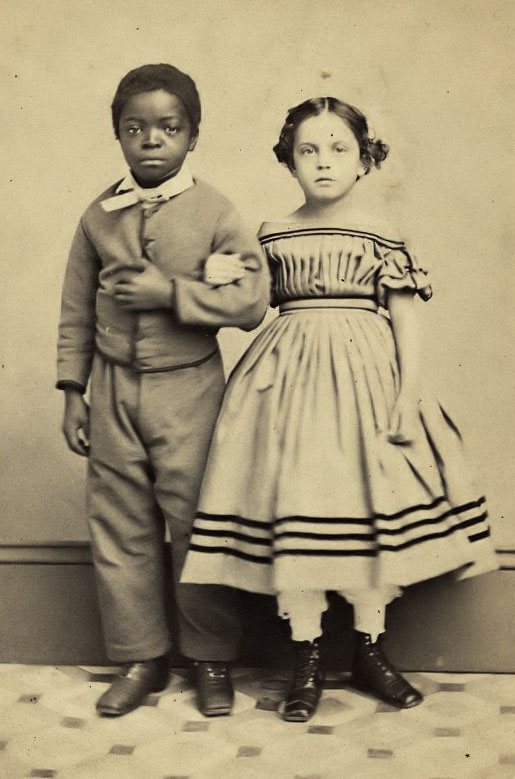 Mary Johnson was cook in her master’s family in New Orleans. On her left arm are scars of three cuts given to her by her mistress with a rawhide. On her back are scars of more than fifty cuts given by her master. The occasion was that one morning she was half an hour behind time in bringing up his five o’clock cup of coffee. As the Union army approached she ran away from her master, and has since been employed by Colonel Hanks as cook.

Robert Whitehead—the Reverend Mr. Whitehead perhaps we ought to style him, since he is a regularly-ordained preacher—was born in Baltimore. He was taken to Norfolk, Virginia, by a Dr. A. F. N. Cook, and sold for $1525; from Norfolk he was taken to New Orleans where he was bought for $1775 by a Dr. Leslie, who hired him out as house and ship painter. When he had earned and paid over that sum to his master, he suggested that a small present for himself would be quite appropriate. Dr. Leslie thought the request reasonable, and made him a donation of a whole quarter of a dollar. The reverend gentleman can read and write well, and is a very stirring speaker. Just now he belongs to the church militant, having enlisted in the United States army.

A large photograph of the whole group which you reproduce has been taken, and cartes de visite of the separate figures. They are for sale at the rooms of the National Freedman’s Relief Association, No. 1 Mercer Street, New York, or I will send them by mail on receipt of the price: $1 for the large picture, 25 cents each for the small ones. The profits to go to the support of the schools in Louisiana.  (source: Gilder Lehrman Institute of American History) 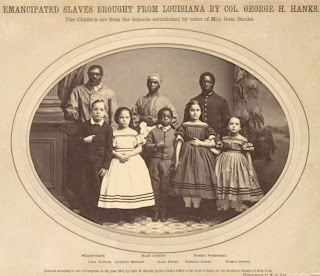