The Formation of Philadelphia's Black Community

From the Los Angeles Times, "Philadelphia Brothers : FORGING FREEDOM The Formation of Philadelphia's Black Community, 1720-1840 by Gary B. Nash (Harvard University Press)," by Joseph Boskin , on 2 October 1988 -- No other dream, no other issue in American society has rattled us, has refused to allow us to live in harmony with democratic images as has race. It has reached into every aching aspect of our culture and forced a constant re-evaluation of the historical past in an attempt to comprehend the wrenching relationship that exists between blacks and whites at this very moment.

Now comes this superbly written book by Gary Nash, one of the prolific scholars on the subject, on the early history of the races at a particularly crucial juncture that occurred in the city of Philadelphia that sheds insight into the entire process. 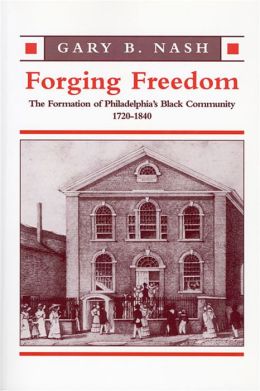 The City of Brotherly Love was no ordinary urban community in the years that he is writing about. For several generations following the Revolution, it was the largest and most vibrant center of free black life in the country. If ever there was an opportunity to work out the broad lines of a biracial society that could serve as model for the future, he observes, it was in this place, at this time.

Nash observes that it all began auspiciously. Philadelphia was refuge to free blacks because of its renown as an area of mixed ethnic and religious groups and by its focus on the abolition of slavery. Yet, as blacks from the South moved into the city over the decades, regardless of their low numbers, white began to perceive and exaggerate them as a threat to their well-being. By 1830, the proportion of blacks actually amounted to less than 10% of the population. The emerging stereotype, an image that would take hold under the derogatory name of Sambo, was a pronounced sign of negative white attitudes. A race riot initiated by whites in 1834 destroyed churches and businesses, and in violence instructive of inner feelings focused on the more prosperous blacks. By the end of the decade, a color line had been firmly established, a demarcation that Nash laments as "a dream deferred."

What of the black community during these tumultuous, turnaround years? Nash turns his attention to the response of the emerging culture during these trying decades. A particular strength of his work lies in his detailing of the resiliency and creativity of black culture in the city. "Not despairing passivity, though disillusionment and a sense of futility must have overcome nearly everyone at many moments," he writes, yet in its wake, there was intense activity to build their own society. Blacks laid the foundations of multidenominational churches, educational facilities, benevolent organizations, fraternal societies and newspapers. In sum, representations of a growing sense of their own autonomy.

An expanded urban consciousness filled the community. Black Philadelphia became a focal point for debating issues vital to their concerns: the sensitive problem of African colonization, the struggle for abolition, the nature of education. It is small wonder that the first annual Negro convention met in the city in 1830. Pepper-Pot Woman at a Philadelphia Market, 1811

In this way, Nash's work neatly complements many of the recent studies that have delved into Afro-American reaction and affirmation to their slave and segregated circumstances. Certain salient black characteristics that evolved during these feverish activities became beacons for future generations. At the center of the subculture, Nash observes, was a "penchant for conviviality, an unrestrained display of emotions and a desire to present oneself as individualistically as possible, as if to obliterate the drudgery and submission required under slavery or later, in the cities, the poverty and blasted ambitions of many free blacks."

A century later, the black urban migrants in the West and Midwest developed identical responses in their struggles with racist attitudes and practices.

As has been the case with black culture over the centuries, however, this "maturing of the black community" in Philadelphia received scant attention at the time. The author writes bluntly about the consequences of the terrible disparity between white image and black reality: "This mental limitation was formed by the compulsion of a sprawling, democratizing society to reinstitute order and hierarchy through racial stratification and by the economic advantages white Philadelphians derived from keeping black Americans in a servile position." Nash sharply labels this epoch as one of "tragedy and triumph," a phrase that personifies much of American racial history. As he aptly observes, not until the contemporary period would society resume what racially sensitive Philadelphians had begun several centuries ago, that is, "perceiving the possibility of a society undivided by race."

It is in these terms that the Philadelphia story has meaning for the next moment in history: whether this possibility will be again seized upon to achieve what has thus far eluded us.  (source: Los Angeles Times)