The Battle of Manassas or Bull Run, 1861 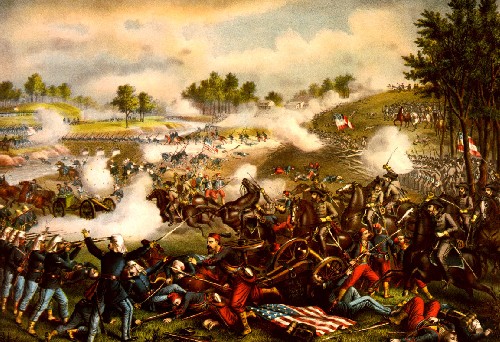 From History Net --  Battle Of Bull Run Summary: The First Battle of Bull Run (Manassas) was the first major land-based confrontation of the American Civil War. The Union army commander in Washington, Brigadier General Irvin McDowell, gave in to great pressure to begin campaigning before his men’s 90-day enlistments expired, although he did not feel the army was adequately trained yet, leading to a stunning Confederate victory and ending northern hopes of a quick end to the war. 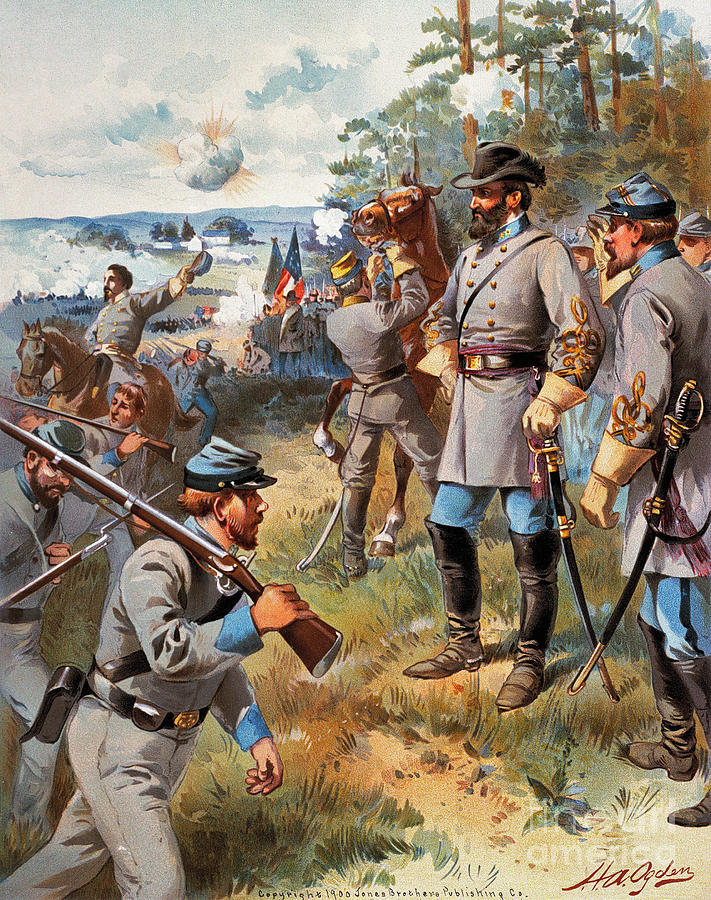 Amassing An Army At Manassas


On July 16, 1861, he set out with the Army of Northeastern Virginia, about 28,400 men, from Washington to attack the Confederate forces near Manassas, Virginia, just 25 miles away, and push them farther from the Northern capital. Brigadier General P.G.T. Beauregard had been massing the Confederate Army of the Potomac at Manassas since the spring of 1861 and had about 21,800 soldiers at hand. He was protecting a key rail station at Manassas Junction and had fanned his troops out along Bull Run north of town. General Joseph E. Johnston, though senior in rank to Beauregard, arrived from the Shenandoah Valley not long before the battle but being unfamiliar with the terrain, deferred to Beauregard. The Battle Of Bull Run Begins


After arriving in the Manassas vicinity on July 18, Brig. Gen. Daniel Tyler’s Union division probed Bull Run and engaged in a skirmish at Blackburn’s Ford. After losing about 150 men, Tyler withdrew. With information from additional reconnaissance, McDowell planned to use two columns to attack the Confederates left flank while a third circled to the far right flank and south to provide a distraction, cut the Confederates off from Richmond, and force them farther southeast.

McDowell’s plan counted in part on Union major general Robert Patterson’s troops preventing General Joseph Johnston’s Army of the Shenandoah in Winchester from providing reinforcements to Beauregard, ensuring the Union would outnumber the Confederates at Manassas. Unbeknownst to McDowell, on the morning of July 20, Johnston’s troops had begun boarding the railroad at Piedmont Station in a steady stream to reinforce Beauregard; Patterson had waited too long to engage them.

Very early in the morning on July 21, McDowell sent two divisions north toward Sudley Springs, while another division was to create a diversion by attempting to cross Bull Run at Stone Bridge. Confederate colonel Nathan Evans suspected the attack at Stone Bridge was just a diversion to conceal a larger movement and, upon receiving confirmation of this from his signal officer, redirected most of his men to Matthews Hill. They were able to slow down the Union divisions advancing from the north, but by midday they were being driven back toward Henry Hill, across the road behind them. 
Brigadier General Thomas Jackson’s Virginia brigade, Col. Wade Hampton and his Legion, and Col. J.E.B. Stuart’s cavalry arrived at Henry Hill to reinforce the Confederates. Jackson set up a line of artillery on the crest of the hill, where the artillerymen would be protected. McDowell moved his artillery from Dogan Ridge to Matthews Hill, and the contesting batteries engaged in a fierce fight, during which a civilian was wounded; Mrs. Judith Henry, ill and in bed in her home on Henry Hill, would succumb to her wounds later in the day.

Near the end of the artillery fight, Brig. Gen. Barnard Bee, on Henry Hill with Jackson, declared that the Union was about to break their lines, to which Jackson replied "Then we shall give them the bayonet!" To rally his troops—or perhaps in anger at Jackson coming to his aide too slowly—Bee exclaimed "Look at Jackson standing like a stonewall," bestowing the nickname "Stonewall" on Jackson. In a show of persistence and bravery, Jackson’s brigade charged the Union artillery line, overran it, captured guns, and changed the course of the battle. Jackson continued to press against the Union lines, telling his men to wait until they were within 50 yards of the enemy before attacking, "And when you charge, yell like furies!" Confederate troops gave the first Rebel yell of the war.

The seesaw battle was still in doubt as the afternoon wore on. When Beauregard saw a column of dusty troops coming up the road, he was uncertain which side they belonged to. The flag of both sides used red and white stripes and blue upper left corner; he couldn’t be certain which flag the newcomers carried, and he contemplated ordering a retreat. Then a wind sprang up, and the Confederate national flag unfurled; Johnston’s men had arrived. The Rout Of Union Troops


The Union troops, attacked unexpectedly by these new arrivals, fled in a disorganized retreat that turned into a rout. The Confederates, who were also disorganized, did not pursue. The Southerners lost nearly 2,000 men, the Northerners over 2,700, over 1,200 of whom were taken prisoner or otherwise missing. In recognition of this victory, Beauregard was promoted to full general on August 31, to rank retroactively to the day of the battle.

Aftermath of The Battle of Bull Run

The ferocity of the fighting and the number of casualties at First Bull Run were a wake-up call to both sides. Five days after the battle, McDowell, blamed for the defeat, was replaced by Major General George B. McClellan as Union army leader. Johnston’s Army of the Shenandoah and Beauregard’s Army of the Potomac were combined. Not long after Gen. Robert E. Lee was placed in command of the combined force, he permanently renamed it the Army of Northern Virginia.

The flag incident showed the need for a more readily identifiable Southern banner. The "Southern Cross" design, a blue X with white stars on a red banner, the flag most commonly associated with the Confederacy, was adopted as a battle flag, although it was used more in the Eastern Theater than in the West. (source: http://www.historynet.com/battle-of-bull-run)