From Georgia Info "This Day in Georgia History," Compiled by Ed Jackson and Charles Pou of The University of Georgia -- 1907 Governor Hoke Smith signed an act proposing to amend Georgia's constitution by imposing a literacy test as a requirement for registering to vote.

Hoke had campaigned for office in 1906 on a platform to disfranchise black voters in Georgia. The Constitution of 1877 had imposed as requirements for voting that the voter be a male citizen of the U.S., be at least 21 years of age, and be a resident of Georgia for one year and of the county for six months prior to the election. Additionally, a voter must have paid all taxes owed since 1877. The 1907 proposed constitutional amendment, however, added a literacy test. Because most blacks at the time had little or no formal education, the literacy test disqualified most. However, many whites also could not pass a literacy test, so the constitutional amendment allowed an exemption for all persons of "good character" and who "understand the duties and obligations of citizenship under a republican form of government." Voter registrars in each county determined who met these qualifications. Also exempted from the literacy test was anyone who owned at least 40 acres of land or who had taxable property worth at least $500. 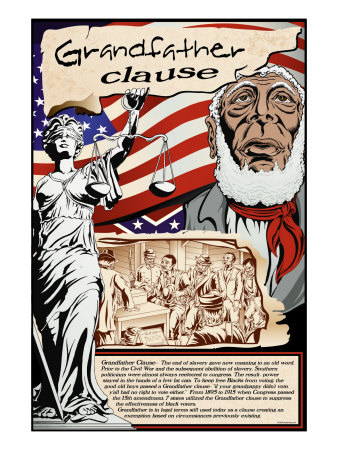 Because many whites could not meet any of these qualifications, the constitutional amendment provided yet another exemption from the literacy test – any person who had served during wartime in the U.S. or Confederate military, or who was a descendant of such a veteran, could vote. Because many white Georgians had grandfathers who had served in the Confederate Army, this provision became known as the "grandfather clause."

Further disfranchising blacks, the proposed amendment restricted participation in party primaries or party conventions to qualified voters. Georgia voters would approve the disfranchisement amendment in the general election on Oct. 7, 1908.

1907 Gov. Hoke Smith signed an act making it illegal to fish in any waters in the state on Sunday. Violation of the ban was made a misdemeanor offense. (source: Georgia Info )
Posted by Ron at 4:11 PM