SOUTHERN BACKLASH AGAINST THE NEW DEAL

CHAPTER 21. BACKLASH AGAINST THE NEW DEAL IN THE SOUTH


Vernon Johns came to Alabama at a time of rising conservatism and reaction against the New Deal. This is all the more to his credit, showing he was a true prophet and not just responding to current movements.

Some observers thought that Alabama became one of the most liberal states in the union for a brief moment in time during the start of the period of the Great Depression. Southern politics can be very confusing unless one is quite clear on the difference between populism and liberalism. Alabama "liberalism" was really Alabama populism and populism is not a liberal movement. It is a right wing movement based on the common man's resentment against big business (and blacks). The economic rhetoric about helping the common man fooled some observers into thinking that Alabama populism was liberal. It was not. Even the great Jim Folsom, governor of Alabama, was not a true liberal, but rather an Alabama populist with nice liberal-sounding rhetoric. 
Southern Reaction against the New Deal


The South at first liked Roosevelt's New Deal because it helped them economically (Hamilton 1987:115). But as the New Deal proceeded, the South felt threatened because to them it looked as though the blacks would be substantially helped and this might upset the system of segregation. Southerners were especially upset about the racial activities of Mrs. Roosevelt. Roosevelt's 1941 executive order creating a Fair Employment Practices Committee (FEPC), coupled with the threat of federal laws against lynching and poll taxes, provided anti-New Dealers with the ammunition they wanted.

It pained Roosevelt to realize that the Southerners, more than any other group, had done him in (Egerton 1994:221&228). They dismantled one New Deal program after another. The election of 1944 was Roosevelt's last hurrah for even the most moderate of the Southern politicians, Pepper of Florida and Hill of Alabama, "resorted to public affirmations of white supremacy in order to get themselves reelected."

The 1946 off-year elections resulted in a drubbing for President Harry Truman. The Republicans now controlled both houses of Congress for the first time in almost twenty years. On December 5, 1946 Truman announced the formation of a fifteen-member Committee on Civil Rights to study and recommend new legislation aimed at protecting all segments of the population from discrimination and intolerance. In 1947 on the steps of the Lincoln Memorial, Truman addressed ten thousand people assembled for the annual conference of the NAACP -- the first such appearance a U.S. president had ever made -- and said forthrightly that full civil rights and freedom must be guaranteed to all Americans. The historian David McCullough said the speech was "the strongest statement on civil rights heard in Washington since the time of Lincoln" (Egerton 1994:386,414,415-416). Symbolizing the progress in civil rights, April 11, 1947 marked the debut of Jackie Robinson with the Brooklyn Dodgers. It was trends and events such as these that so upset the South.

In Jackson, Mississippi on May 10, 1948, the States' Rights Party met in formal convocation. Reading the Montgomery Advertiser during those years one finds constant references to States' Rights and Dixiecrat supporters. For instance, October 1, 1948 (p. 18) the paper carried a story about Frank Dixon, former governor of Alabama and States Rights Democrat. He said the fight "is not against the Negro," but added that dire results would follow the setting up of the FEPC (Fair Employment Practices Commission). "I have never been one of those who fomented hatred between the two races. There's room for both, separate and apart." Blacks virtually did not exist in the pages of the Montgomery Advertiser. The few articles on blacks in the newspaper were negative or were complaints about the NAACP.

There was a brief period of optimism in liberal camps with Truman's election in 1948. But opposition from the South helped to insure that it was indeed very brief. 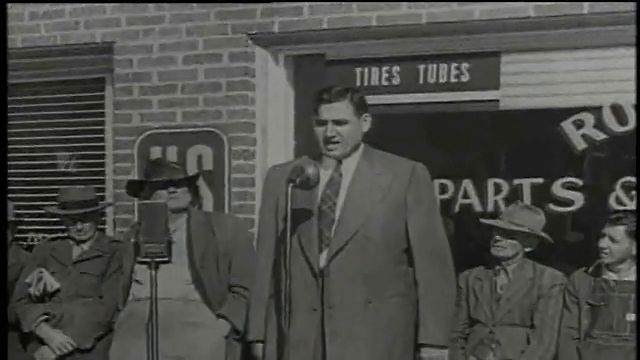 
Egerton (1994:219-220) writes that "Some of the Southern states that historically had been rated as inferior frontier regions -- Alabama, Tennessee, Arkansas -- had managed by the 1940s to send some fairly progressive people to Congress." In May 1940 Alabama Democrats elected a convention delegation dominated by New Deal loyalists. These included Hill, Steagall, John Bankhead Jr., and Lt. Gov. Carmichael. (Hamilton 1987:91)

Liberalism in Alabama crested in 1938 when politicians like Hill, Bibb Graves, John Bankhead Jr., and Congressman Luther Patrick of Birmingham, sponsored the Southern Conference for Human Welfare (SCHW) (Hamilton 1987:107). The SCHW leaders attacked old southern bugaboos like the poll tax, lynching, freight-rate differentials, tenancy, and even referred obliquely to racial injustice. When this assemblage of New Dealers, idealists, labor leaders, prominent blacks, a few Socialists, a handful of Communists, and perhaps a dozen fellow travelers met in Birmingham that year, its open challenge to segregated seating provided the conservatives with a great deal of ammunition. Frightened by the ensuing row, prominent politicians like Hill, Patrick, Bankhead, and even Claude Pepper dissociated themselves officially from the SCHW. With the threat of changing racial customs, in the South the designation "liberal" became a real political liability.

To the surprise of Hill and fellow progressives and the consternation of right-wing Alabama Democrats, a "wild card," seemingly out of nowhere, seized their party's nomination for governor in the spring of 1946 (Hamilton 1987:141). Jim Folsom's emergence in 1946 was a surprise even to the progressive New Deal faction of the Democratic party. Folsom represented the persistence of populism in the politics of the South. (Barnard 1974:8)

Folsom was six-feet-eight inches tall with a size sixteen shoe. He left college in the pit of the Depression and wound up in Washington, D.C. with the WPA (Frady 1968:100). Folsom was every town's overgrown boy, a little bashful, but full of mischief that was easy to forgive. He had an aura of sincerity and integrity that widely appealed to Alabamians (Barnard 1974:20). Compared to other Southern politicians, Folsom (Elliott 1992:81) was color-blind. "This is the one thing that set him apart from even some of his most otherwise faithful followers, and it eventually proved his ultimate undoing." For decades before Folsom, Alabama had been dominated by a succession of governors representing the state's power structure of Black Belt plantation owners and large industrialists, which Folsom (Frady 1968:99) designated "the big mules." Campaigns for governor were insular and sedate affairs, largely conducted in back offices. Candidates rarely engaged in hand-shaking, baby-kissing popular campaigning.

When Folsom (Frady 1968:100) emerged as the front-runner in the first primary, a general state of alarm sounded among the establishment. Folsom planned to reapportion the state legislature, rewrite the state constitution, put at least one paved road in every county, distribute free textbooks, and repeal the poll tax.

Big Jim Folsom took to stumping the state in 1942 attacking the "Big Mules" of industry and agriculture and courting the votes of the little men. He was populism incarnate. To Alabama politician Carl Eliott (1992:79-80), Folsom represented everything he believed in. "He knew how to speak the people's language better than just about anybody I'd ever heard. To him, everyone was just ‘fokes.'" He won the election.

Not really surprising, Folsom's administration (Frady 1968:101) was "essentially a disappointment. In most of his larger hopes, including reapportionment and the repeal of the poll tax, he was frustrated by a legislature still dominated by the Black Belt." After less than two years in office in January 1948 Folsom (Elliott 1992:80) announced his candidacy for the United States presidency. That dream, however, was short-lived. The electorate soon discovered that Folsom had fathered an illegitimate son during the 1946 gubernatorial campaign. The presidency was out and so was Folsom as governor in 1950.


George Wallace (Frady 1968: 74,81,83) was born in August 1919 in a small house just outside Clio, Barbour County, in southeastern Alabama. From early adolescence he became intensely interested in politics. In 1935 when George was sixteen his father took him to Montgomery to run for page in the state senate. In the autumn of 1937 he arrived on the campus of the University of Alabama with eventual ambitions to be governor of Alabama. He graduated in 1942 and was handed a blank sheet of paper instead of a diploma on commencement night because he was still financially unable to pay some old student fees.

Back from the war, in 1946 he (Frady 1968:92-93,96-99) ran for the state legislature in Barbour County and won. Folsom was Wallace's patron saint. When Wallace first came to Montgomery as a freshman legislator, he was simply a part of the Folsom phenomenon in Alabama. Wallace was so young and naive that as soon as he arrived in the capital city, he asked Folsom to appoint him speaker of the house.

Wallace had a real sense of identification with the less fortunate whites of Alabama and was genuinely concerned about their welfare. But Wallace's genuine involvement with populism represents the dangers faced by liberal thinkers when they romanticize the sufferings of common white folk.  (source: Vernon Johns)


Big Jim Folsom, Part 2: The Race Issue from Robert Clem on Vimeo.
Posted by Ron at 7:29 AM