From The Pittsburgh Post-Gazette, by Len Barcousky, on 28 March 2012 "History center exhibit, Pitt website show slavery's footprint in Western Pennsylvania during the late 1700s into the mid-1800s" -- Lack of cash need not have deterred a white resident of frontier Pittsburgh from acquiring a slave.

In 1787, Col. John Gibson, a former commander of Fort Pitt, advertised the sale "to any Person residing in the Country, A Negro Wench." 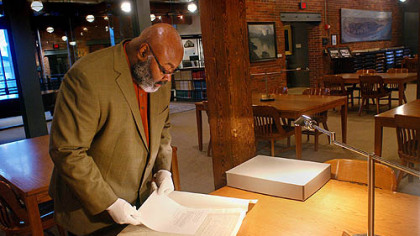 Hard currency was in short supply in southwestern Pennsylvania, so Col. Gibson was willing to consider a barter deal for his human property: "Produce will be taken, or cattle of any kind."

While slavery is often associated with the antebellum South, slaves did live in the area that in 1788 became Allegheny County.

Though this region never was home to massive plantations like those in Virginia or the Carolinas, slaves were here for more than half a century. They were almost always in small groups and never concentrated in large numbers, like the more than 300 slaves who toiled on the several farms around Mount Vernon owned by George Washington.

A farmer in what became Pine Township in 1796 might own a few slaves to work his land, while a Pittsburgh attorney might have bought a black woman to cook and keep house for his status-seeking wife. 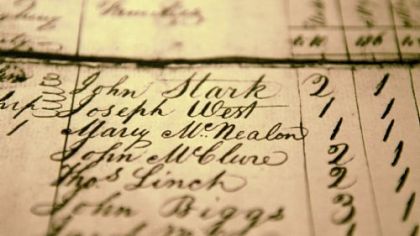 "Slaves in Western Pennsylvania worked on farms, in coal mines, on the docks, in the shipping industry and as house servants," according to Samuel W. Black, curator of African-American collections at the Heinz History Center.

Holding black people in bondage and the buying and selling of slaves remained legal in colonial Pennsylvania despite the passage in 1780 of a state law for gradual emancipation.

Under that carefully crafted legislation, the state's 6,000 or so enslaved blacks were to remain in that condition for the rest of their lives. Their children, however, if born after the law took effect, would be freed -- when they reached age 28.

Pennsylvania was, nevertheless, the first state to legislate against slavery. And while the law had flaws, its passage was an important step toward eventual abolition, Mr. Black said. 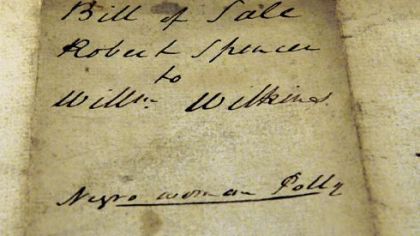 A bill of sale, dated Aug. 16, 1813, for the sale by Robert Spencer to William Wilkins of "Negro woman Polly" is among the documents in the Heinz History Center exhibit.(Lake Fong/Post-Gazette)

"She is an excellent cook and can do any kind of work in or out of doors," according to his paid notice in the June 2, 1787, edition of the Pittsburgh Gazette, the direct ancestor of today's Pittsburgh Post-Gazette.

Pennsylvania was a large and economically important state, he said. Its most important city, Philadelphia, would serve several times as the fledgling nation's capital and as a symbol of freedom.
Colonial politics made gradual emancipation the best outcome 18th century opponents of slavery could expect, University of Pittsburgh historian Laurence Glasco said.

"People had bought and paid for their slaves," he said. "Many had gone into debt to buy them. People realized that slavery was an awful thing, but politicians were not going to raise taxes to pay compensation to slave owners who freed their slaves." Mr. Glasco, who teaches a course on the history of blacks in Pittsburgh, also serves as narrator for a on-line exhibit on slavery in Pittsburgh called "Free at Last?"

The website was based on a 2008-09 exhibit created by Robert Hill, vice chancellor for public affairs at the University of Pittsburgh, for the Heinz History Center.

The centerpiece of both the history center's and on-line versions of the exhibit is a collection of more than 50 court filings.

The "Manumission Documents" cover the last decades of the 18th century and the first half of the 19th century, according to David Grinnell, chief archivist at the Heinz History Center, where the papers are stored. The records also include indenture agreements. These were used to describe the terms under which the children of slaves, born after 1780, would provide free labor to their masters until they turned 28. That long period of unpaid service was to compensate the slave owners for the early costs of raising and training a child when he or she could do little or no productive work.

In 2007, then Recorder of Deeds Valerie McDonald Roberts transferred the original hand-written documents to the Heinz History Center, where they are kept in a climate-controlled archive.
The University of Pittsburgh Digital Research Library made an electronic copy and a typed transcript of each court filing. All of those documents can be viewed on-line as part of the "Free At Last?" exhibit.

The documents also will be part of a new long-term exhibition at the history center scheduled to open in 2011. While "From Slavery to Freedom" will focus on southwestern Pennsylvania, the exhibit also will look at the emancipation issue across the nation. Other sections will deal with the Underground Railroad, the name for an network of routes and safe houses used to aid escaping slaves flee the South, and the Abolitionist movement.

There are stories behind each of the legal filings, according to Mr. Glasco and Mr. Black.

Documents involving young children are among the most moving, Mr. Glasco said.

In 1825, "a Negro girl named Sally" was freed by her Virginia master, and she was sent north to Pennsylvania to work for a Pittsburgh businessman named John McKee.

In the ornate language of indenture law, "the said Sally doth agree and covenant with and bind herself to the said John McKee and his assigns and heirs" as a cook and house servant for the next 22 years. Sally was just 6 years old when she made her mark, closing the deal.

"The idea of giving up your entire childhood always grabs the attention of school kids," Mr. Glasco said.

The last filing is the freedom certificate for a 44-year-old black woman named Nancy Rollins. Her name also is spelled "Rolinger" in the document. Handicapped by the loss of her right eye, she bought her freedom for $500 on July 11, 1857. That amount is the equivalent of about $12,700 in modern currency.
Profit-maximizing slave owners discovered an early flaw in the Pennsylvania's gradual emancipation rules. "Some would send their pregnant women South to give birth," Mr. Glasco said. "The babies wouldn't be born in Pennsylvania, so they would be slaves for life even if their mothers soon returned here."

The law was amended in 1788 so that children of slave mothers living in Pennsylvania were covered by the 28-year rule, even if they were born in another state.

Despite its shortcomings, Pennsylvania's 1780 law dealt a blow to the slave system.

"Some were sold, and many of the rest ran away," he said. "They would head to places in New York or Ohio where they were not known and where there already was a substantial free black community."
At the same time that the number of slaves was dropping, the number of free blacks was rising. While some worked on farms, more lived in Pittsburgh and Allegheny, the name for the separate city that is now the North Side, Mr. Glasco said. Many lived in an integrated neighborhood known as Little Haiti in the Lower Hill District near Liberty Avenue.

Having legal proof that a slave had been given or purchased freedom became even more important after 1850 and the passage of the federal Fugitive Slave Law. That controversial measure made it easier for slave catchers to recover "property" -- escaped slaves -- in free states. Papers filed in Pittsburgh attesting that a black man or woman had been born free or had been granted freedom could be used to fight what abolitionists often described as kidnap attempts.

That was a lesson G.W. Ferris, a Pittsburgh resident of mixed race, may have learned too late. Mr. Ferris had lived in the city for many years and had passed as white, according to an April 7, 1859, story that appeared in what was now called The Daily Pittsburgh Gazette.

Two years earlier, he was forcibly taken south to Alabama by a slave catcher named G. Shaw -- no first name is given in the story. Mr. Shaw was charged with kidnapping, but an Allegheny County jury acquitted him after a Tennessee slave owner testified he had recognized Ferris as a one of his former slaves.

The Gazette, a Republican newspaper opposed to slavery, was distressed by the verdict. "Ferris ... is doomed to a life of hopeless bondage," an anonymous reporter lamented. (source: The Pittsburgh Post-Gazette)

WQED OnQ OnDemand Free At Last?
Posted by Ron at 11:17 AM