The New York Times reported on August 16, 2009 in an article entitled, "Through the Memoir of a Slave," by Rachel L. Swarns -- WASHINGTON — In 1809, a young boy from a wealthy Virginia estate stepped into President James Madison’s White House and caught the first glimpse of his new home. The East Room was unfinished, he recalled years later in a memoir. Pennsylvania Avenue was unpaved and “always in an awful condition from either mud or dust,” he recounted.

“The city was a dreary place,” he continued.

His name was Paul Jennings, and he was an unlikely chronicler of the Madison presidency. When he first walked into the Executive Mansion, he was a 10-year-old slave.

But over the course of his long life, Mr. Jennings witnessed, and perhaps participated in, the rescue of George Washington’s portrait from the White House during the War of 1812 and stood by the former president’s side at his deathbed. He bought his freedom, helped to organize a daring (and unsuccessful) slave escape and became the first person to put his White House recollections into a memoir.

Next week, Mr. Jennings’s story will take center stage when dozens of his descendants gather for a reunion in the White House. Historians say it will be a remarkable moment in the history of the mansion, which was built with slave labor and now houses President Obama, the first black person to hold the office, and his family.

Historians say the visit will highlight the intimate, day-to-day role that enslaved men and women played in the White House, a community that is little known and whose members have long languished in obscurity.

“It really is a story that isn’t well told yet,” said Lonnie G. Bunch, director of the Smithsonian National Museum of African American History and Culture. “It lets people realize just how big a shadow slavery cast on America.”

The White House curator, William G. Allman, said few historical records existed about the black people who lived and worked in the building during its earliest years. Slaves were barred from learning to read and write, and their owners often considered their stories inconsequential.

So the relatively detailed accounting of Mr. Jennings’s life is notable, particularly because he was so closely linked to President Madison and to the portrait of George Washington, which is considered the White House’s most valuable historical object. The portrait, painted by Gilbert Stuart, is the only item currently on display that was also present when the White House opened in 1800. The Jennings family will view the painting during their White House reunion on Aug. 24. The Obamas are expected to be away on vacation that day.

“I don’t think we’ve ever had a family group like this visit before,” Mr. Allman said. “It’s just one of those stories that’s never going to be front and center because the records are very scanty.”

New details about Mr. Jennings’s life and his family have emerged through the research of Beth Taylor, a research associate at Montpelier, the Madison plantation in Virginia. Over the past two years, Ms. Taylor has pored over court records and tracked down and interviewed his descendants, discovering historical documents and the only known photograph of Mr. Jennings.


She also found a rare edition of Mr. Jennings’s recollections, which were released in 1865 under the title “A Colored Man’s Reminiscences of James Madison.” (A white acquaintance of Mr. Jennings collected his reminiscences and got them published.)

In the 19-page memoir, Mr. Jennings, who served as a footman and later a valet to President Madison, recalled the chaotic escape from the White House hours before the British burned the building in 1814.

He described President Madison as a frugal and temperate man who owned only one suit, socialized with Thomas Jefferson and was so careful with his liquor that he probably never “drank a quart of brandy in his whole life.”

Mr. Jennings said he often served and shaved the president and recalled that his master was kind to his slaves. He was 48 when he finally bought his freedom, years after Madison’s death in 1836.

As a free man, Mr. Jennings worked in the government’s pension office, bought property and even helped support the former first lady Dolley Madison with “small sums from my own pocket” when she fell on hard times. Mr. Jennings, who died in 1874 at age 75, did not discuss his personal difficulties in his memoir, but Ms. Taylor and others say he encountered many hardships. As a slave, he was forced to live apart from his wife and children, who lived on another plantation. And he seems to have chafed under Mrs. Madison’s ownership after her husband died.

Articles in abolitionist newspapers uncovered by researchers at the University of Virginia’s Dolley Madison Digital Edition, an online collection of Mrs. Madison’s correspondence, reported that she treated her slaves poorly. In March 1848, the Liberator newspaper published a letter charging that Mrs. Madison had hired out Mr. Jennings to others and then kept “the last red cent” of his pay, “leaving him to get his clothes by presents, night work, or as he might.”


The letter also said Mrs. Madison had refused to free Mr. Jennings, as her husband had wished. Instead, she sold him to an insurance agent, who in turn sold him to Senator Daniel Webster for $120. (He promptly set Mr. Jennings free and let him work off the debt as a servant in his household.)

Julie Doxsey found the articles under the supervision of Holly Shulman, the editor of the Dolley Madison Digital Edition. They said they believed this might be the reason Mr. Jennings dared to challenge publicly Mrs. Madison’s claim that she saved Washington’s portrait during the War of 1812, a charge that threatened to tarnish her image. It might also explain why he helped one of Mrs. Madison’s slaves try to escape in the ill-fated effort to spirit dozens of slaves to freedom in 1848 aboard the schooner known as the Pearl. 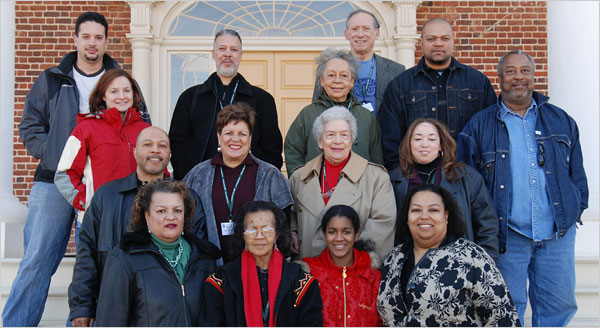 For some of Mr. Jennings’s descendants, the discovery of such history was utterly unexpected.

Raleigh Marshall, a 25-year-old technology consultant and Mr. Jennings’s great-great-great-grandson, said he was startled to recognize his own features reflected in the photograph of Mr. Jennings that Ms. Taylor found. “It was a little bit eerie,” said Mr. Marshall, who met other members of the Jennings clan for the first time in February at a reunion organized by Montpelier. “It’s a lot to absorb.”

Margaret Hayes Jordan, 66, who grew up knowing a little about Mr. Jennings, her great-great-great-grandfather, said she was proud to see him get some recognition. In the White House, Ms. Jordan said, she will reflect on what he and other forebears might make of the family’s journey over the past 200 years. “Our ancestors will be looking down and saying, ‘Oh my goodness, look at this,’ ” she said. (The New York Times )

Elizabeth Dowling Taylor recounts the life of Paul Jennings, born into slavery on the plantation of James and Dolley Madison in 1799 and later a member of the household staff of President Madison. Click here to watch on C-Span2.
Posted by Ron at 8:07 PM