Triangular Trade: Goods Taken From The Americas to Europe

The goods taken from the Americas to Europe


The letters of instruction written to the captains of slave ships by their owners have useful information about the type of goods which slave ships carried back to Europe from the Americas. The letter of instruction to Captain Brownbell of the Blessing, the first recorded slave ship to set sail from Liverpool, ordered him to sell his cargo of Africans in the West Indies and then to load with sugar, cotton and gingers. Liverpool slave traders were noted for shipping a variety of different goods back from the Americas to Europe on the same ship. This allowed them to take advantage of changing market prices. Slave traders from other British ports usually traded only in one kind of good. Carry on reading to find out more about sugar, coffee, tobacco, slaves, bills of exchange and cotton. 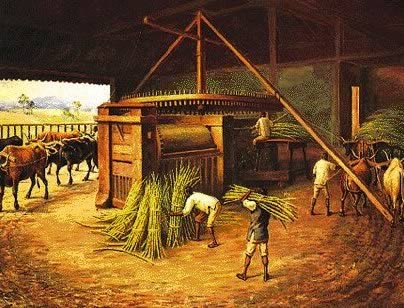 Sugar growing was introduced to the Americas by the famous explorer Christopher Columbus on his second voyage there in 1493. After that it was grown nearly everywhere that Europeans settled in the Americas. In the 17th century the English set up sugar plantations on West Indian islands such as Barbados and Jamaica. Liverpool first imported sugar in the 1660s which was before ships from the port began slave trading. Early on plantation owners used a form of labour called indentured labour. Prisoners were also transported from Britain to the Americas as a cheap source of labour. However, the slave trade boosted sugar production a lot by supplying plantation owners with slave labour. The wide scale use of slave labour meant that more sugar could be produced.

Tobacco was first grown by early settlers in Virginia in North America in the early 17th century. This was after attempts to grow sugar there had failed. By the 1620s tobacco was the region’s main export. Then Virginia shipped on average 65,000lbs (29,500kg) of tobacco to Europe a year. Tobacco was first imported to Liverpool in the 1640s. By the 1670s exports of Virginia tobacco had grown to over 20 million lbs (9,070,000kg) every year. At the end of the 17th century Liverpool was importing nearly 600 tons (610,000kg) of tobacco a year. In just over ten years this increased to 1600 tons (1,630,000kg) a year. To begin with tobacco was produced using indentured British labour but by the start of the 18th century the supply of indentured labourers had dried up. This led tobacco growers to turn to African slave labour.

Coffee drinking was very fashionable in 18th century Europe. Coffee houses were opened for coffee drinkers and by 1740 there were about 550 coffee houses in London alone. These were important meeting places where people met and did business. At the Merchant’s Coffee House in Liverpool merchants could read the daily shipping newspapers and see what was going on at the nearby docks. Coffee was one of the crops grown on plantations using slave labour in the Americas.

A small number of slaves were brought back to Liverpool on ships’ return voyages. Some worked as seamen to replace crew members who had died or deserted. Others had been given to ships’ captains and doctors as payment in kind (a payment which is made in goods instead of money) for their services. These slaves might then be sold on by their owner either through adverts in local newspapers or at auctions held in local coffee houses. It is said that the last public auction of slaves in Britain took place at Liverpool’s Merchants' Coffee House. These slave auctions which took place in European coffee houses are a reminder of the strong link between slave trading and the goods that Europeans bought.

Cotton from America was first imported into Britain at Liverpool by William Rathbone IV (1757-1809) in 1784. Cotton was a product of slave labour so it is odd that an abolitionist like Rathbone should trade in it. Earlier in his life William Rathbone IV had persuaded his own father, William Rathbone III (1726-1789), not to take a share in a slave trading voyage to Africa. Since Liverpool was near to the textile manufacturing areas of north-west Britain it became the country’s main port of entry for cotton. In 1802 half of Britain’s cotton imports arrived through Liverpool. This increased to nearly 70% in 1812 and 90% in 1830. (source: E. Chambré Hardman Archive)
Posted by Ron at 3:40 PM