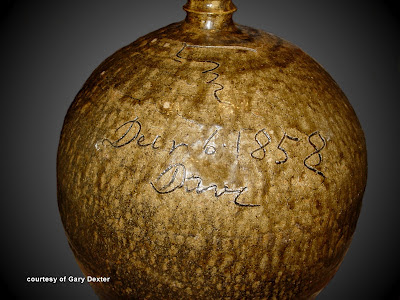 Living in South Carolina, with an ear open to authentic local craft and art, one hears often of the Edgefield District, known for its distinctive traditional stoneware. South Carolina is rightfully proud of her two native crafts, the carefully woven Sea Grass baskets, made in the traditional style by the Gullah people, African Americans, who were formerly enslaved on the coastal Sea Islands, and also for its stoneware pottery, which is most significantly, tied to a slave named Dave who inscribed his massive pots with poetry. Dave’s legacy has grown not only because of his superlative technical skill but also because he dared to write poetic couplets on his pots, and to sign his name, which was bold, brave, and daring. His pots now fetch six figures in the antiques market.

The Charleston Museum, was, in 1919, given the first inscribed jar by Dave, by a contributor named Stoney. The massive forty gallon jar so inspired the director at the time, Paul Rea, that he wrote, a few months after it arrived, that “the jars should be collected…to prepare a history of the old potteries.” That did not happen until Laura Bragg, subsequent director of the Charleston Museum, visited the Edgefield area in 1930, learning about the one legged potter who worked in the area all his life, from 1834 to about 1870. The Edgefield pottery collection at the Charleston Museum is a testament to Bragg as a preservationist. Bragg offered an article about the history of the South Carolina jug and pottery for International Studio, which had previously printed her work, but the pottery piece was never published.

Dave they say, lay on the railroad tracks when he learned he was to be sold and relocated to a plantation to the west. The train severed his leg, making him less valuable to the buyer who then refused him. Dave, now one legged, continued his work as a potter, working with am able bodied companion, named ‘Baddler”: the latter works, which can be seen at the Charleston Museum, were signed “Dave and Bladdler”. The great potter stayed and worked in South Carolina all the days of his life. He continued to produce pots – large, great pots, inscribed with short phrases of poetic wisdom, and bravely inscribed in his hand and signed with his name, a testament to an undaunted spirit. 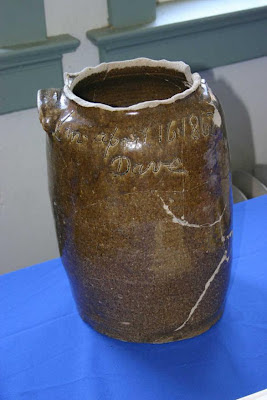 The following couplets are some of the poetic inscriptions, on the pots of Dave, the slave potter, of Edgefield, South Carolina. 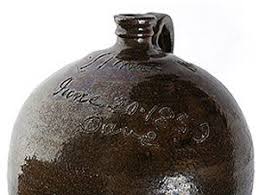 This noble jar will hold 20
fill it with silver then you’ll have plenty
8 April, 1858
When you fill this jar with pork or beef
Scot will be there to get a peace
(on the other side)

This jar is to Mr. Seglir
who keeps the bar in orangeburg
for Mr Edwards a gentle man
who formerly kept Mr Thos bacons horses
21 April 1858