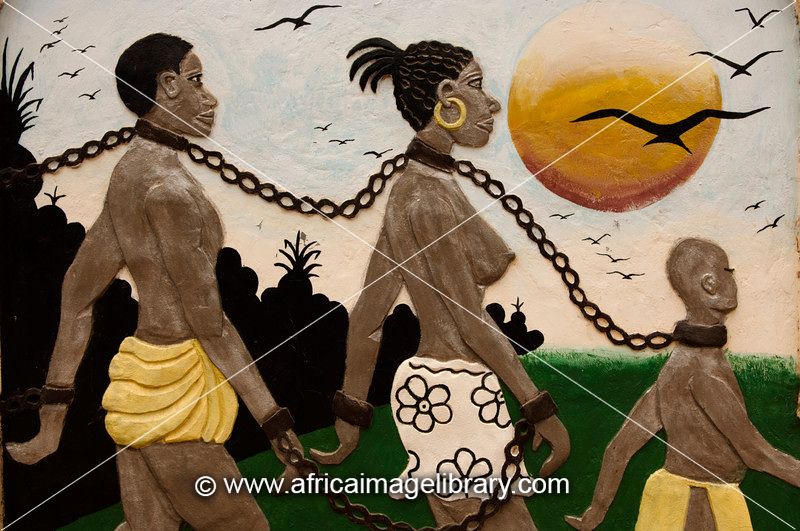 The river Gambia is one of the most important transport arteries in West Africa, due to its proximity to America and Europe. 20 miles from its mouth there is a small island that lies close to the north bank.

The first European visitors to the island were the Portueguese. In 1455, an expedition under Luiz de Cadamosto stopped there to bury a sailor who had died of disease. They named it St. Andrews Island after him, but it was nearly 200 years before Europeans returned.

England claimed the island, but it was still uninhabited when settlers from the Duchy of Courland and Semigallia (modern day Latvia) arrived in 1651. The Courlanders built a fort at the mouth of the river (Fort Bayona, which was abandoned a few years later) and another fort on St. Andrews Island, called Fort Jakob.


Sweden declared war against the Polish-Lithuanian Commonwealth (of which the Duchy of Courland was a vassal) in 1655. In 1659 the Dutch offered to garrison the Fort Jakob while its owners were on the defensive in Europe and they expelled the Courlanders.

Under the Dutch, Fort Jakob suffered an attack from French privateers in the pay of the Swedes. After this setback, the Dutch were forced out of the fort by local tribesmen, who prevented them from getting fresh water from the mainland.

The Courlanders returned and finished repairing their fort in 1661. A few days later, an English expedition under Sir Robert Holmes arrived, demanding that the island be handed over to England. The outnumbered Courlanders surrendered without a fight.

Sir Robert Holmes' expedition was an undertaking of the Company of Royal Adventurers, who took over the fort, calling it Fort James after the Duke of York. Holmes also built a fort downriver on Dog Island, called Fort Charles, but it was abandoned in 1666. Courland's colonies in the Gambia were formally ceded to England in 1664.

Fort James was square with four bastions'and it contained the governors lodging and barracks. There was a three-storey tower with a platform on the roof for a lookout. This enabled the garrison to spot any ship coming up the river long before it arrived.

Outside the central fort there were various storehouses and other outbuildings, including accommodation for slaves. James Island played an important part in the slave trade, with slaves being kept there before being put on ships and taken to the West Indies. The Courlanders had begun to trade for slaves, shipping them to their colony on Tobago, but it was under the English (later the British) that the slave trade on the river Gambia took off.

The island's shoreline was stabilised with pilings in an attempt to fight against the erosion caused by the river flow and tides. There were three batteries on the shore outside the fort, two facing downriver and one facing upriver. These batteries, which mounted 4 or 5 guns each, were designed to give the garrison control of the river, denying access to rival nations or free traders. However, Fort James had a serious disadvantage in the fact that there was no fresh water on the island.

This strech of the Gambia is tidal and the water is salty, so the garrison had to make frequent trips to the mainland to obtain fresh water. So although Fort James could easily be defended because it was on an island, it was always dependant on friendly settlements on the river banks for drinking water.

In 1681 the French established a trading outpost at Albreda, on the north bank of the river opposite James Island. This marked the beginning of Anglo-French rivalry for control of the river Gambia. In 1688 the War of the Grand Alliance broke out and provided an opportunity for both nations to damage their rival's trade in West Africa. In 1692 the English successfully captured the French settlements of Saint Louis and the Ile Gorée, but these were quickly recoved by the French.

In 1695, after the recapture of Gorée, a French squadron of 6 ships sailed up the Gambia and attacked Fort James. The garrison was weakened by fever and the governor surrendered after just two shells had been fired into the fort. The French force slighted the fort, but later the French African company occupied the island and planned to repair it.

In the end Fort James was returned to England by the Treaty of Rijswijk'in 1697 before any work could be carried out. The fort was rebuilt between 1698 and 1701, to the same design as before. War broke out again in 1702 and this work was put to the test. 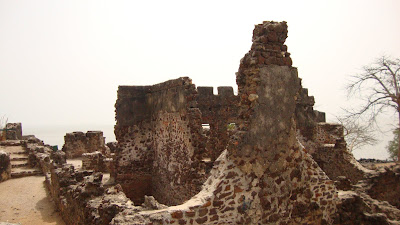 Fort James was attacked and ransomed by the French in 1702, damaged by fire in 1703, attacked (and ransomed) again in 1704, suffered a mutiny in 1708 and was finally captured, demolished and abandoned in 1709. In 1713, the Treaty of Utrecht'restored James Island to Britain.

Once back in British hands, the fort was rebuilt from 1714 to 1717. In 1719 it was captured by the pirate Howel Davis, who visited the governor, posing as a merchant. His men took the fort by surprise and looted it. In 1725, disaster struck again when the powder magazine'exploded.

Repairs to the fort included the construction of an annex called the spur. This building was two storeys high and was built against the south-east side of the fort. It contained storehouses and accommodation for the garrison. However, the spur annex did not last long and was demolished by 1750, perhaps because it compromised the defence of the central fort. By this time erosion had taken its toll on the island's shore, especially on the south end, where the upriver battery was now underwater. The other outbuildings were often destroyed and rebuilt during the fort's history.

It was probably because of the explosion in 1725 that the powder magazine was moved to a better position under the east bastion. Expense magazines were placed in the south and west bastions, to hold shot close to the guns.

In the mid-18th century a cistern was built between the north and east bastions. The new cistern, which was divided into two sections, was much larger than the previous water storage facilities on the island, although it affected the defences.

Being situated between two bastions, it blocked some of the flanking fire across these bastions. However, the cistern was made with a angled exterior faces so that there was no dead ground. There was also a parapet around the top for soldiers.

In 1755 the fortifications on James Island were surveyed by an engineer called Watson. By this stage the two remaining curved batteries were in poor condition and a line of outbuildings formed the south-west edge of the island.

In accordance with Watson's recommendations, the two curved batteries, along with the straight 7-gun battery that had been established between them, were rebuilt in brick. This strengthened them against enemy fire but more importantly protected them from erosion.


In 1757, during the Seven Years' War, the fort, assisted by nearby British vessels, repulsed an attack by French privateers. Albreda was burned and the British took the French colonies in Senegal. In 1765 Fort James was made the capital of British Senegambia.

This shows the strategic significance of the fort. Although it was not a complex fortification by European standards, its island position controlling the river Gambia made it one of the most important fortifications in West Africa.

In 1768 a Niumi interpreter was taken to the island and died there in mysterious circumstances. In revenge 500 Niumi tribesmen launched an attack against the fort. The Niumi attacked in canoes and approached the island from downriver.

Using the artillery in the batteries facing downriver, the heavily outnumbered garrison was able to prevent the attackers from landing, sinking a number of canoes and forcing the rest to retreat to the bank. In 1778, during the American War of Independence, a flotilla of French ships arrived at Fort James, which surrendered without a shot being fired. This time the French slighted the fortifications much more thoroughly than on previous occasions. Mines were detonated beneath the bastions, the cistern and two of the curtains.

In 1807 the British government abolished slave trading and an effort was made to stop foreign slavers from using the river Gambia. This led to the founding of Bathurst (modern-day Banjul) in 1816 at the mouth of the river (where the Courlanders had their outpost, Fort Bayona). James Island was sporadically occupied by a small guard to keep watch over ships in the river, but the fort was never rebuilt. It was finally abandoned in 1829. (source: Fortified Places)

Gambia is in Western Africa surrounded by Senegal against the Atlantic Ocean and is the smallest country in continental Africa, and follows the flood plains of the Gambia River with some low hills. Independent from the UK in 1965 and briefly united with Senegal named Senegambia from 1982 until 1989, the Gambia has limited resources but a high concentration of birds, so agriculture and farming with light manufacturing and tourism make up the economy.