History Of The Fisk Jubilee Singers

Fisk University opened in Nashville in 1866 as the first American university to offer a liberal arts education to “young men and women irrespective of color.” Five years later the school was in dire financial straits.

George L. White, Fisk treasurer and music professor then, created a nine-member choral ensemble of students and took it on tour to earn money for the University. The group left campus on October 6, 1871. Jubilee Day is celebrated annually on October 6 to commemorate this historic day.

The first concerts were in small towns. Surprise, curiosity and some hostility were the early audience response to these young black singers who did not perform in the traditional “minstrel fashion.” 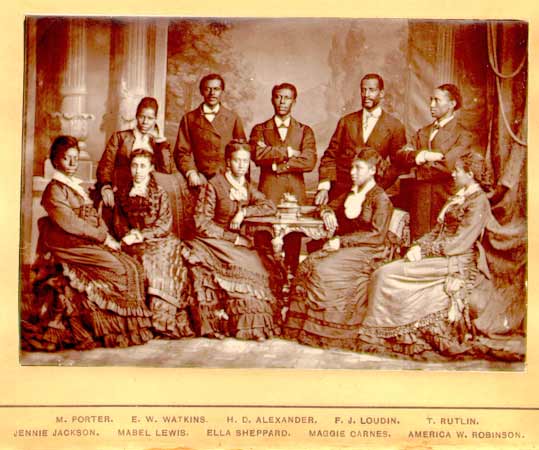 One early concert in Cincinnati brought in $50, which was promptly donated to victims of the notorious 1871 fire in Chicago. When they reached Columbus, the next city on tour, the students were physically and emotionally drained. Mr. White, in a gesture of hope and encouragement named them “The Jubilee Singers,” a Biblical reference to the year of Jubilee in the Book of Leviticus, Chapter 25.

Continued perseverance and beautiful voices began to change attitudes among the predominantly white audiences. Eventually skepticism was replaced by standing ovations and critical praise in reviews. Gradually they earned enough money to cover expenses and send back to Fisk. In 1872 they sang at the World Peace Festival in Boston and at the end of the year President Ulysses S. Grant invited them to perform at the White House.

In 1873 the group grew to eleven members and toured Europe for the first time. Funds raised that year were used to construct the school’s first permanent building, Jubilee Hall. Today Jubilee Hall, designated a National Historic Landmark by the US Department of Interior in 1975, is one of the oldest structures on campus. The beautiful Victorian Gothic building houses a floor-to-ceiling portrait of the original Jubilee Singers, commissioned by Queen Victoria in during the 1873 tour as a gift from England to Fisk.[http://www.fiskjubileesingers.org/our_history.html]