Empress Josephine on the Island of Martinique 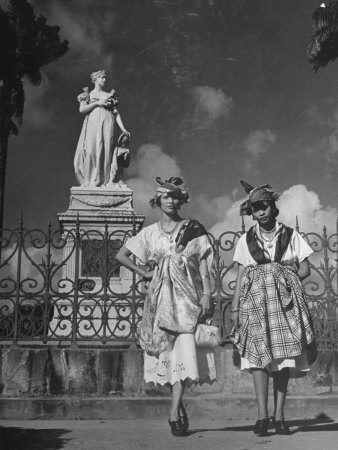 
From the Associated Press, "n Martinique, island life has French accent," Jennifer Kay on March 10, 2012--LES TROIS-ILETS, Martinique — Even now, Paris feels a world away from this tropical paradise.

How much farther the immense capital must have seemed to Marie-Josephe-Rose Tascher de la Pagerie, a teenager on a remote sugar plantation with an improbable future. “You will be queen,” a fortune-teller told her, according to the local legend.

Indeed, she would leave this southeast Caribbean island and rise through French society through the last days of its monarchy, the French Revolution and Reign of Terror to marry Napoleon Bonaparte, who would crown her Empress Josephine.

If she returned to Martinique today, she would find a sophisticated French-influenced culture enhanced by the flavors and rhythms of the non-Europeans who have lived here for centuries. They make up most of the population of this chic yet laid-back island, which dips into the Atlantic Ocean on one side and the Caribbean Sea on the other.


Josephine’s humble beginnings on Martinique are explored here in a museum, the Domaine de la Pagerie, just outside the resort village of Les Trois-Ilets, named for three little islands just off shore.

When Josephine lived here in the mid-18th century, Martinique was a French colony. Her family owned more than 200 slaves on their plantation south of the capital, now called Fort-de-France, and the songs sung by these slaves and their descendants in Martinique’s sugar cane fields are now performed by professional musicians and dancers wearing bright Madras plaids in luxury hotels.

Just the foundation of their “great house” remains, a modest stone square set in a green field of grass under the gaze of a white stone bust of Josephine. The original house, set atop a small hill with a view of its fields in the valley below, was blown down in a hurricane when Josephine was not much more than a toddler. 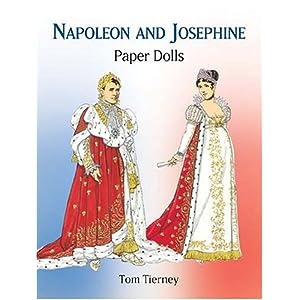 Financial problems kept her parents from rebuilding, so the family moved into the upper quarters of the property’s sugar factory. The foundation that remains supported a wooden house built after Josephine left for France in 1779.

The kitchen, a separate building, has been restored as a small museum containing Josephine’s tiny, canopied bed, portraits, porcelain gifts bearing Napoleon’s and her faces when they were the toast of Europe, and a copy of her letter of marriage to Napoleon, along with other historical documents. There are also rusted chains that once shackled slaves, resting at the bottom of a glass case.

The legacy of slavery still tarnishes Josephine’s reputation in Martinique. Many still blame her for Napoleon’s reinstitution of slavery when France regained control of its colonies from the British, even though it’s unclear whether Josephine influenced that decision. It certainly would have benefited her family, members of the island’s wealthy elite who have considerable land holdings to this day.

Perhaps this is why Josephine’s face and name are absent from most of the island’s narrow streets, colorful buildings and even the Pagerie’s gift shop, which mostly features postcards of island scenes. And there’s nothing subtle about the condition of the statue of Josephine in the main square in Fort-de-France, where the intimidating stone fort still looms over cruise ships and ferries in the harbor. The white stone figure is regal in a flowing, low-cut gown, but it was vandalized years ago — beheaded, red paint splattered down the white dress and Josephine’s name struck from the pedestal.

The most prominent faces instead in Fort-de-France are two late intellectuals, Aime Cesaire and Edouard Glissant, whose writings explore black identity in a French-speaking country. Banners celebrating their works hang in the sleek, modern airport named for Cesaire in 2009. Cesaire’s book-filled office has been preserved in the capital’s main theater, a landmark building that also bears his name.

Martinique is a department of France. French is the official language and the euro is the official currency. Locals drive Renaults and Citroens on twisty mountain roads and shop for the latest European fashions in boutiques.

But its cuisine — French staples spiced with curry, fresh seafood, tropical fruits — is flavored by what’s grown locally along with the mix of African and Indian dishes brought to the island over the centuries. The covered market in the heart of Fort-de-France has packs of spices and vials of vanilla for sale and Madras plaid tablecloths for those who want to try the cuisine at home. 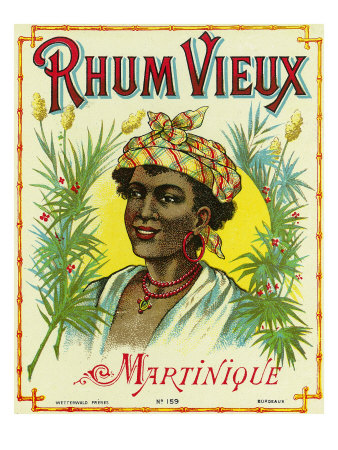 A meal is complete with a tumbler of ti punch, a sweet cocktail made with white rum, sugarcane syrup and lime. Tours at any of the island’s rum distilleries will explain and let you taste the subtle differences between the white rums and the golden “vieux” or aged rums.

Even as empress, Josephine longed for her childhood Caribbean home. She tried recreating Martinique’s tropical splendor at her home near Paris, Malmaison, a refuge famous for its gardens and greenhouse.

Visitors to Martinique can experience a similar retreat at the Jardin de Balata, a botanical garden perched in the hills above Fort-de-France. A paved walkway winds its way through bromeliads, orchids, palms, flowering trees and a cluster of the Balisier flower, the flower of Martinique, a red blossom that looks something like a Bird of Paradise.

Farther north along Martinique’s Caribbean side are the black sand beaches around the small town of Saint-Pierre, built around the ruins left by a volcano that smoked through Josephine’s lifetime and finally erupted in 1902.

Off the island’s Atlantic coast are the “baths of Josephine,” shallow turquoise waters where the young, would-be empress swam, according to local legend. It’s hard not to feel a bit decadent when the catamaran crew tosses a cooler containing a bottle of rum into the water with you. (source: Associated Press)
Posted by Ron at 5:11 PM