The Double Crossed Freedmen: 40 Acres and a Mule

The Sea Islands: An Experiment in Land Redistribution


Prior to any formal, governmental policy on reconstruction, General William T. Sherman created his own land redistribution policy. Sherman meet with Edwin Stanton, Lincoln's Secretary of War, and a delegation of twenty black leaders on January 12, 1865 to address the problems of the Freedmen. After hearing that what the Freedmen desired most was their own land, he issued Special Field Order #15. This order declared that the Sea Islands on the coast of South Carolina and Georgia would be reserved for Freedman. Under this order each family would be eligible for 40 acres of land for their own cultivation. The area included the islands of Hilton Head, Port Royal, St. Helena and many other smaller islands that had been under Union control since 1861. Sherman would go on to allow Freedmen use of army mules that were were no longer fit for army service. These acts would serve as the basis for the cry of "forty acres and a mule," the basis for many Freedmen's hopes and demands later in reconstruction.

What prompted Sherman's order? Was he a humanitarian? Or a staunch supporter of the Freedmen? It seems likely that Sherman's intention was simply to relieve his army of the thousands of Freedmen and women who had been following it since Sherman's invasion of Georgia. As Sherman's army marched by, freedman had abandoned the plantations and begun to follow the army. Feeding and clothing thousands of people became a strain. Sherman would later claim that his order was a temporary measure and was not meant to give the Freedmen permanent possession of the land. 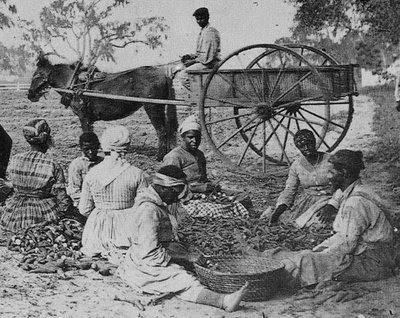 Whatever his intentions, by June of 1865 over 40,000 Freedmen had settled in the Sea Islands area, working over 400,000 acres of land. The former slaves believed that this was their land now, theirs to keep. Congress had also established the Bureau of Refugees, Freedman and Abandoned Lands (the Freedmen's Bureau) shortly after Sherman's order was issued. The bureau had the authority to give forty acres plots of abandoned and confiscated land to to Freedman and Southern white refugees who had been loyal to the Union. In addition, the man in charge of the Sea Islands as inspector of Settlements and Plantations, General Rufus Saxton, was a supporter of the Freedmen and he worked to make the program successful. 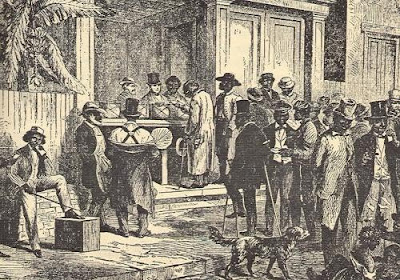 In addition to providing land for agriculture, community leaders worked to provide other resources. Under slavery it had been illegal to teach a slave to read. The freedman demanded education and schools were established throughout the islands. Black and white educators came from all over the nation to provide assistance. But the policy of land redistribution never met with full support in Congress. Some argued for a "hands off" approach to the Freedmen, which which they claimed would foster independence, while others insisted that it would be unfair to abandon the Freedmen to their former masters without the economic base they would need to become independent citizens. The freedmen and women, on the other hand, came to the table with a clear sense that they had already earned the land with their labors as slaves--the profit they produced had been stolen from them, and so they had already paid for the land many times over. Congress created the Freedmen's bureau as a temporary compromise measure which would aid Freedmen and women in the immediate transition to freedom but prevent any long-term dependency. Even so, between Sherman's Special Field Order and the creation of the Freedmen's Bureau, the former slaves on the Sea Islands believed that they had secured the land they needed.

Their security would turn out to be short-lived. President Andrew Johnson began the assault on the Sea Islands experiment in January 1866, when he removed General Saxton from office, pardoned many former rebels, and gave the order that confiscated land be returned to its former owners. The freed men and women were urged to go to work as paid laborers for their former masters.


The Sea Islands came to serve as a test for the policy of land confiscation advocated by the Radical Republicans in Congress. Massachusetts Senator Charles Sumner had argued that the plantations must be divided in order to break the power of the slave holding class who had fostered the rebellion. Pennsylvania Congressman Thaddeus Stevens argued that the South could never be truly free until its land was worked by independent owners instead of a ruling class. Looking positively on the Sea Island experiment, Stevens proposed redistributing 394,000,000 acres owned by about 70,000 rebels. The land would be given to Freedmen and the remainder sold to aid the government in reducing the public debt and providing pensions. 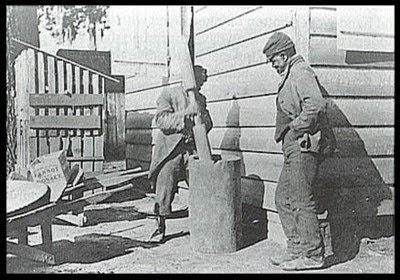 The omission of land confiscation from the Reconstruction Acts of 1867 was a severe blow to the Radical Republicans, and to their plans to aid the Freedmen and break the Southern ruling class. Without a strong economic base the Freedmen were again at the mercy of the white men. It allowed white slaveholders to regain power over the Freedmen and would eventually lead to the system of contract labor and sharecropping. Some Freedmen would retain control of their land in the Sea Islands, but by the 1920s these holdings were on average only two to four acres. The Sea Islands changed but not in the way Radical Republicans and Freedmen had hoped. They went from one of the richest districts in the South for the white slaveholders to a beach resort for the well-to-do. The dream of a independent yeomen class of African American farmers faded, and life for African Americans in the area came to be characterized by poverty and limited opportunity. [source: written by M. O'Malley & F. L. Carr for GMU's History 122 (Spring 1999)]. 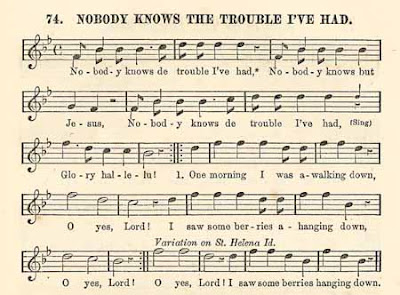 This song was a favorite in the colored schools of Charleston in 1865; it has since that time spread to the Sea Islands, where it is now sung with the variation noted above. An independent transcription of this melody, sent from Florida by Lt. Col. Apthorp, differed only in the ictus (The accent that falls on a stressed syllable in a line of scanned verse) of certain measures, as has also been noted above.

The third verse was furnished by Lt. Col. Apthorp. Once when there had been a good deal of ill feeling excited, and trouble was apprehended, owing to the uncertain action of Government in regard to the confiscated lands on the Sea Islands, Gen. Howard was called upon to address the colored people earnestly and even severely. Sympathizing with them, however, he could not speak to his own satisfaction; and to relieve their minds of the ever-present sense of injustice, and prepare them to listen, he asked them to sing. Immediately an old woman on the outskirts of the meeting began "Nobody knows the trouble I've had," and the whole audience joined in. The General was so affected by the plaintive words and melody, that he found himself melting into tears and quite unable to maintain his official sternness. (Source: Slave Songs of the United States)