Between 1752-1753 a 100-foot (31.4- metre) frigate was built at The Royal Danish Chartered West Indian and Guinean Company's shipyard in Copenhagen. The frigate was christened Cron Prindz Christian after the prince who later became King Christian VII.

After the launching followed the work of the fittings, rigging and accoutrements. The first journey in the triangular trade was extra long. At last they ended in the town of St. Louis on the island of Hispaniola, where the surviving slaves were sold.

The first attempt to take part in the so-called triangular trade was very dramatic and cost many lives. During the following years the company confined its trade to the West Indies until a new company, The Guinean Company, took over their ships, forts and trading privileges in 1765.

The Cron Prindz Christian was re-christened and given the name Fredensborg, after one of the Danish-Norwegian forts on the Gold Coast of West Africa. Some time after the shipwreck, a similar ship was built in Copenhagen and was also christened Fredensborg, meaning Castle of Peace. (source: UNESCO)


How much do any of us know about the role of Denmark and Norway in the slave trade? A book published in Norway last year, now available in English, won't quite tell readers all they ever wanted to know about Norwegian slave traders, but it provides a fascinating first glimpse. The Fredensborg ferried slaves and sailors from Denmark and Norway to the Gold Coast, St. Thomas and St. Croix. It sank in 1768, off the coast of Norway, and Svalesen was a member of the team of divers who discovered its remains more than two centuries later. Here he looks at the actual workings of the slave ship Dat Danes and Norwegians who married African women; at the ""Negro dances"" African slaves performed on board the ship; at how, in order to placate the slaves, the slave traders gave them brandy and tobacco on the trip from Africa to the Caribbean. The clunky translation gets in the book's way (the 1700s were ""a time when much was different in comparison to modern criteria""). And Svalesen relies too much on Captain Ferentz's diary, quoting it for pages on end with little interpretation to help the reader. Moreover, though he offers other evocative details of daily life on the slaver Dlike the list of clothes the captain brought on board Dhe never tells what we might learn from knowing that a ""slightly worn gold-braided hat"" and a pair of red slippers made it into Captain Kimnig's suitcase. The result is a book long on antiquarianism but short on history. The subject mighty seem an incongruous one for a gift book, but the volume is heavily and handsomely illustrated (64 b&w and 93 color illus.), and for readers who want an immediate sense of the horrific genesis of African-American history, this is an excellent choice. (source: Publisher's Weekly)

The transatlantic slave trade was the most extensive forced transportation of human beings in history. Millions of Africans were carried across the Atlantic Ocean to the Americas. The ships are gone, but their tracks remain on the ocean floor.

This Internet exhibit is about the Danish-Norwegian slaver, "Fredensborg". The ship ran aground on the southern coast of Norway on December 1, 1768. Her journey in the triangular trade, between Denmark, West Africa and the Virgin Islands, was nearly completed. Remains of artefacts from the wreck, combined with the ship's papers - brought ashore after the grounding, and preserved - give us an outstanding documentation of the European triangular trade.

1735 A survey divides island into nine quarters, which still exist today. Sugar and cotton plantations are laid out.

1738 Plans approved for the building of Fort Chistiansvaern.

1747 St. Croix is given its own government, separate from St. Thomas and St. John . The planters soon become frustrated with strict company regulations and petition the king to buy out the Danish West India Company.

1753 The Danish Crown takes over St. Croix . The economic prosperity of sugar cane, rum production, and the slave trade make St. Croix a leading port. The Danes designate the most profitable of the islands - St. Croix. It becomes the new capital for all three islands. Thus, the capital moves from Charlotte Amalie to Christiansted where it stayed until 1871.

Fredensborg was a frigate built in Copenhagen in 1752 or 1753. She was named Cron Prindz Christian after the prince who was to become king Christian VII of Denmark and Norway, and was fitted out as a slave ship. After an unsuccessful stint in the triangular trade, her operational area was limited to the Caribbean, where she sailed as a trader until 1756. The ship was then purchased by another Danish company and renamed Fredensborg after one of the Danish-Norwegian trading stations on the African Gold Coast. On December 1, 1768 Fredensborg sank in a storm off Tromøy in Arendal, Norway.

The wreck was discovered by divers in September 1974. One of them was Leif Svalesen who later has worked to document the ship. 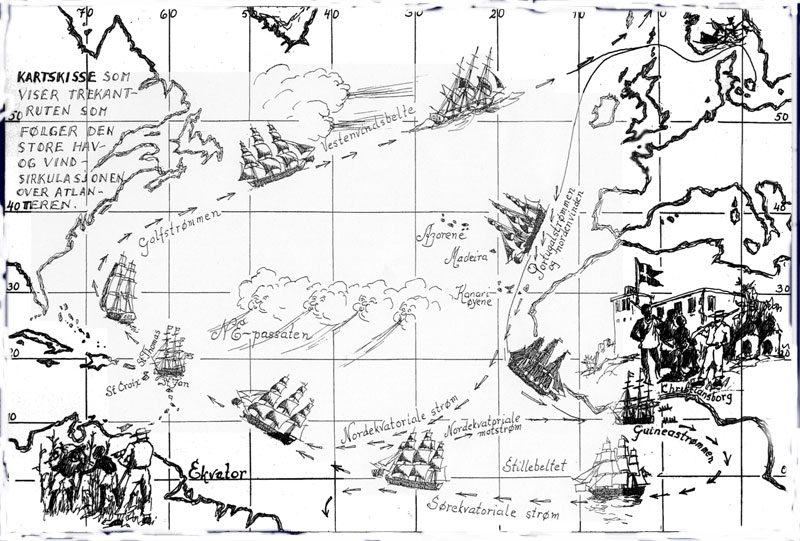 Fredensborg followed the well-established route of the slavers, providing for full cargoes on all three legs of the journey, and taking advantage of the prevailing winds and currents.

In the triangular trade the ships carried the following cargoes, realizing great profits: