Colonel Tye: Captain of the Ethiopian Regiment and Commander of the Black Brigade

Colonel Tye was an escaped slave who became one of the most respected leaders of the Loyalist troops during the American Revolutionary War.

Originally named Titus, Tye was one of four slaves owned by Quaker John Corlis of Monmouth County in New Jersey. Corlis was one of the few Quakers that refused to follow the custom of educating or freeing their slaves by their 21st birthday. Tye’s owner was known to be especially cruel to his slaves, frequently using the whip.

After Lord Dunmore’s Proclamation to offer freedom to those slaves that would join the royal forces, 22 year old Tye, along with 300 other escaped slaves fled to join the British troops in Norfolk. Although the British did not officially commission black officers, Tye soon earned their respect and was eventually promoted to Captain of the Ethiopian Regiment and Commander of the Black Brigade. 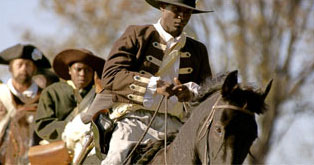 Colonel Tye soon became notorious for his ruthless guerilla tactics during the war. His small mixed race band of guerrillas conducted raids and assassinations across New Jersey. In the summer of 1779, they conducted several raids on Shrewsbury in which they attacked and plundered patriot homes taking clothing, furniture, horses, and cattle. Tye was able to use his knowledge of the county’s waterways in order to conduct these raids. Often, the group would target their former masters and seek revenge. The group was often rewarded with five gold guineas by the British.

During the winter of 1779, Tye was commander of a group of twenty-four black Loyalists known as the Black Brigade. They became infamous for their ruthless raids against the patriots. The group not only seized supplies, they assassinated many American leaders. Joined by the British unit, the Queen’s Rangers, they freed many slaves.

In September, 1780, Tye was shot in the wrist during a surprise attack on the home of Captain Josiah Huddy. Although his wound was minor, his injury proved to be fatal when lockjaw set it. 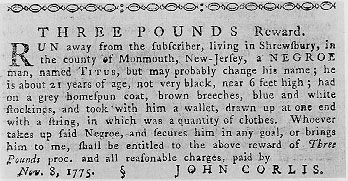 
Text of Document:  "THREE POUNDS Reward.  RUN away from the subscriber, living in Shrewsbury, in the county of Monmouth, New-Jerfey, a NEGROE man, named TITUS, but may probably change his name; he is about 21 years of age, not very black, near 6 feet high; had on a grey homespun coat, brown breeches, blue and white flockings, and took with him a wallet, drawn up at one end with a string, in which was a quantity of clothes. Whoever takes up faid Negroe, and fecures him in any goal, or brings him to me, shall be entitled to the above reward of Three Pounds proc. and all reasonable charges, paid by Nov. 8, 1775." --JOHN CORLIS

Associate Professor Margaret Washington at Cornell University describes Colonel Tye (who was he, and what was his significance during the American Revolution)

Probably one of the most colorful individuals during the American Revolution was a black man named Colonel Tye, an enslaved man in Monmouth Country, New Jersey, enslaved by Quakers who disobeyed the general Quaker ruling that Quakers put their enslaved people on the road to emancipation. So even though some Quaker-owned slaves were getting their freedom, Tye wasn't. And he had a especially cruel master.

When the American Revolution emerged, Tye emerged as a fearless leader. He was only about 21, and he commanded both black and white Loyalists, and literally wreaked havoc in New Jersey and also in New York. He captured patriots. He executed patriots. He visited the region of Monmouth, where he was from, and burned and looted the slaveholders, freed slaves.

He probably had probably 800 men under his command at one point, both black and white. And he would capture people, if he didn't want to execute them, send them to what was called the Sugar House in New York City, and then go on his guerrilla raids. He was probably more feared in that region than any other British loyalist, black or white. The kind of guerrilla warfare that he engaged in kept the country in turmoil.

So he was very important in terms of the morale of African Americans, because many of them joined him. Others who didn't join him certainly got a big charge out of the fact that here was this black man who was leading these raids against the patriots, freeing slaves. And it gave them a sense of their own capacity. And they began to flee the farms and to move into the British, those who didn't join Tye, and also to fight in little guerrilla skirmishes themselves. So he was really largely responsible for the war effort in a non-orderly way, but in a sort of a guerrilla way, in the New Jersey countryside. A very important individual who remained on the scene, beginning in 1778, all the way up through 1780.  [source: http://www.pbs.org/wgbh/aia/part2/2i1632.html]