The reviewer calls the film Black Venus by Abdellatif Kechichethe "two and a half hours of torture." From 8 November 2010 by krsienti: Abdellatif Kechiche is a Tunisian born filmmaker, now settled in France. Known For his films La Graine et Le Mulet (2007) and L’Esquive (2003).
Black Venus (Vénus Noire) pictures five miserable years of Sarah “Saartjie” Baartman in Europe. A Khoisian woman, taken to the old continent by a Dutch farmer Hendrick Caezar. The leading role, played by Yahima Torres, is sublime. Similar to Maria Falconetti in Dreyer’s The Passion of Joan of Arc, largely filmed in close-ups. Not saying a word, not moving a muscle in her face – she manages to tell a variety of feelings with her eyes. Silent, almost mute, while other characters enslave her mostly verbally, she still has everyone revolving around her.

It all begins in London, where Sarah Baartman is exhibited in a freak show to entertain the lowest end of population. Nevertheless, her guardian Caezar, stresses, that Saartjie is not a slave, but an associate for their show. It is hard to believe, when you see her being placed in a cage and treated like a wild animal. As part of this show, she is being whipped, kept in chains and… touched by the curious crowd. For what? For money, of course.

Not only we see the freak-show episodes ad nauseam, with every moment it gets worse. More the curiosity grows, less Sarah is treated like a human. It could not be worse, you think, watching the absurdity of racism and the non-stop humiliation. But it does. Inevitably. 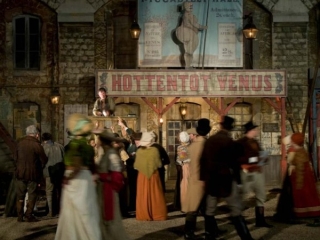 Saartjie’s show is gaining popularity, thus the public craves for more. And there is Réaux, greedy from top to toe, he buys Saartjie and takes her to France. There she performs for the rich and powerful, libertines, all suffering from vanity. These shows tend to get more and more provocative. And less bearable for the cinema viewer.

Indeed, Kechiche tortures the spectator. Not only the theme is difficult, he makes it more complicated to watch. Close-ups of Saartjie’s exhausted and desperate face followed by a roaring crowd. Every single episode of humiliation is put under a magnifying glass. At the end Kechiche goes too far, by allowing the spectator to see what Sarah have tried to hide so ardently. Seemingly, he wanted to assimilate the viewers of the film to those of freak-shows. I’m not sure whether it works as the director had planned, but the leading emotion that you feel is a major disgust. For the exploiters, viewers, scientists… everyone around Baartman’s figure. And at some extent for the director, for his voyeuristic volition to show everything. And here, everything means too much.

When you think you could not be affected more, there comes a documental scenes of her remains being returned and reburied in her homeland. After around 200 years after her birth. A nightmarish fiction is one thing, but a tragic reality is a lot to handle after watching this film.
(http://krsienti.wordpress.com/2010/11/08/venus-noir/) In "Black Venus", French-Tunisian director Abdellatif Kechiche tells the story of Sawtche atrocious, "the Hottentot Venus," which was presented as an animal fair in the nineteenth century in Europe. Return on a colonial phenomenon extremely widespread and popular.
Behind the words used, there is a thought and trucks made ideas. So who knows Sawtche? Person. And Saartjie Baartman? Ah, that reminds you of something but what? Who? However, you know the doom of the "Hottentot Venus", the South African woman exhibited such a stupid show in Europe in the early nineteenth century, and studied by the French scientist Georges Cuvier in the context of building a hierarchy the races. Well, her name was Sawtche, and was later named Saartjie Baartman. But what do they say when we associate the word "Venus" and the epithet "Hottentot"? The first refers more to the goddess of love, these Paleolithic sculptures representing women on the buttocks, hips, breasts or genitals enlarged (Lespugue Venus, Venus of Willendorf, etc.).. The term "Hottentot" would, in turn, a nickname used by Afrikaners to describe Khoïkhoïs, including language to "clicks" features stuttering could talk the ears of Europeans. Needless to say, eight years after the return of the body Sawtche of her native land, nearly two hundred years after her death, the common language still bears the traces of stainless prejudice. (source: http://www.jeuneafrique.com/Article/ARTJAJA2598p190-198.xml0/ )
Vénus Noire-French without subtitles