Namibian Skulls to be Returned from Germany

In the Namibian article entitled, "Ovaherero Skulls And The German Genocide Challenge," Bob Kandetu writes, WORD is around that May 28 2011 will mark the repatriation of the skulls of Namibians from Germany, which were exported during the German-Ovaherero wars in Namibia. 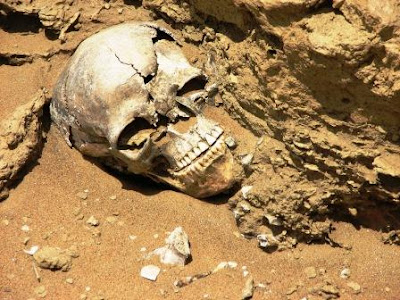 The mood is at best sombre among the Ovaherero and somewhat reminiscent of a day in 1923, when the remains of the watershed Ovaherero King Samuel Maharero were awaited from Botswana by train. 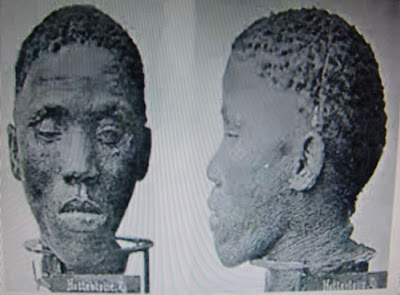 Ovaherero men had spent days frequenting the Okahandja train station. When the train stopped, Hosea Kutako signalled in loud voice. ‘Omuhona Uavaza’. A sea of men stood at attention and when the coffin was drawn from the train by men in uniform, hundreds broke down and cried profusely as if in despair. Then thousands escorted the coffin to the Otjiserandu Commando. They were boxed in by hundreds of horse riders. It was a day filled with mourning and reflection for the Ovaherero of Namibia. 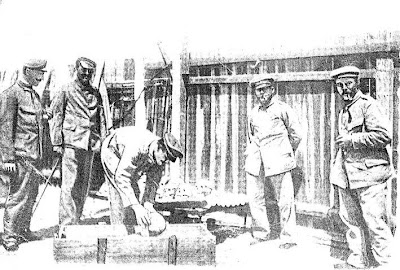 It is hard to imagine what will happen on that day when the skulls will arrive from Germany, but there won’t be celebrations. Recently Utjiua Muinjangue reported in her speech during the Swakopmund commemoration of the Orumbo Rua Katjombondi. She spoke of her visit to Germany and reported having seen one of the Ovaherero skulls in the archives of the Albert-Ludwig University in Freiburg. The number 744 was inscribed onto the skull and the accompanying envelope contained a note with the words: Swakopmund: Süd-West Afrika. Muinjangue paused with a hoarse voice; the audience was in deep reflection and their mood was telling. 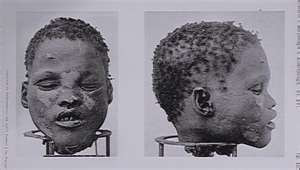 The Ovaherero await the repatriation of the skulls with mixed feelings. They are guardedly happy that this is happening yet they battle with this pent-up rage too. These skulls were taken from Namibia, Swakopmund to be specific. During the war between the Ovaherero and Germans, men were hanged at Orumbo, their heads were removed and their wives forced to clean these heads so that they can be shipped to Germany for laboratory explorations. Those women who declined the instructions were executed on the spot and their bodies buried in the same graves as their beheaded husbands. 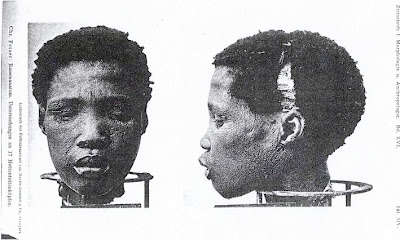 These are the skulls that will be repatriated from Germany and it is no joke that there is rage in the hearts of the Ovaherero men and women at the prospect of receiving these skulls back from Germany. And I intend to mount a campaign for these skulls to be buried in the Orumbo rua Katjombondi in Swakopmund from where they originated, with a fitting ceremony. 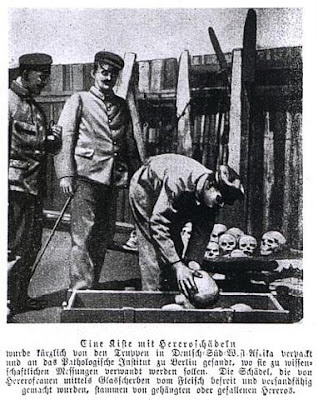 Germans packing African skulls to be sent to Germany
Colonialism was armed robbery and even more; it left behind more devastation than benefits for the subjects, the victims of colonialism. The Ovaherero never declared war on the Germans, in fact they could not, because they had no capacity to travel to Germany and declare war on the German throne. They were found in the only dwelling place they had and knew. After the extermination order and its manifestations, eighty per cent of the Ovaherero had fallen and were destroyed. Their properties were reduced to rubble, their wealth expropriated. They reported to a government they did not know and could never have wished for. This gave rise to the thought of John Updike who once said: “The world itself is stolen wealth… all property is theft and those who have stolen most of it, make the laws for the rest of us”. 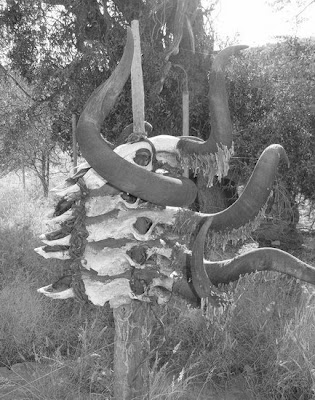 Traditional Nama-Herero Grave
The Ovaherero of Namibia have all the right to charge the German government with genocide and the German government must shoulder the responsibility. No amount of academic discourse will do the trick. (source: The Namibian, 5 April 2011)
Posted by Ron at 11:14 AM