From the website of the United States Senate: John C. Calhoun assumed office as the nation's seventh vice president on March 4, 1825, during a period of extraordinary political ferment. The 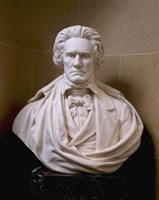 demise of the Federalist party after the War of 1812 had not, as former President James Monroe had hoped, ushered in an "Era of Good Feelings," free from party divisions. Contrary to Monroe's expectations, the partisan strife of earlier years had not abated during his two terms as president but had, instead, infected the Republican party, which had declined into a broad-based but rapidly disintegrating coalition of disparate elements. Five individuals, all of them Republicans, had entered the 1824 presidential contest, one of the most controversial and bitterly contested races in the nation's history. The "National Republicans," a group that included Calhoun, House Speaker Henry Clay, and Secretary of State John Quincy Adams, supported an expansive, nationalist agenda; the "Radicals," allies of Treasury Secretary William Crawford, were strict constructionists and advocates of limited government. Other Republicans had rallied to the standard of Andrew Jackson, a former Tennessee senator and the military hero whose stunning victory at the Battle of New Orleans had salvaged the nation's pride during the War of 1812. 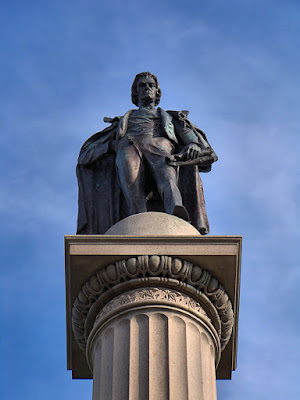 Calhoun initially believed that his break with Jackson would only enhance his chances of believed he might be able to reconcile southern agriculturalists and northern manufacturers with selective modifications in the tariff schedules. But events in South winning the presidency in 1832. He still enjoyed considerable support in the South and Carolina soon forced him to make public his position on the tariff and nullification, a move that effectively killed his chances of ever becoming president. In the summer of 1831, Calhoun protégé George McDuffie electrified a Charleston, South Carolina, audience with a fiery declamation advocating nullification and secession. Calhoun was horrified at this development, as well as by accounts that South Carolina merchants were refusing to pay duties that they considered unconstitutional.

A 1862 Bank of the State of South Carolina $1 Note featuring slaves and a statue of John C. Calhoun, advocate of nullification and State right. (source: Rebel State Currency.)

Calhoun had advanced the doctrine of nullification to provide southern states with a peaceful mechanism for obtaining redress of their grievances, never contemplating the possibility of disunion. He had not endorsed secession in his 1828 "Exposition," arguing that a state could veto and refuse to enforce any law it considered unconstitutional, but, if three fourths of the states subsequently affirmed the law, the nullifying state must defer to the collective will.
The Tariff of Abominations!
Posted by Ron at 12:37 PM