From PBS, World War I:excerpted from Jazz: A History of America's Music  -- On April 16, 1917, America entered World War I, and on New Year's Day of the following year, the 2,000 men of the 15th New Work Regiment landed at Brest on the coast of Britanny. The French soldiers and sailors and civilians who turned out to greet them had never seen or heard anything like these Americans. The officers were white, as had been all of the American combat soldiers who had trooped ashore in France since the previous June. But these enlisted men were all black. So were all the members of the big regimental band, and as it swung into its distinctive version of the Marsellaise, the onlookers on shore were still more puzzled. These Americans played with such spirit and rhythmic drive that it took the French eight or 10 bars to recognize their own national anthem. Then, one of the musicians in the band remembered, "there came over their faces an astonished look" followed instantly by "alert snap-to-it attention and [a] salute by every French soldier or sailor present."

Marching at the head of the band was its director, Lieutenant James Reese Europe, who had been the most eagerly sought-after society dance bandleader in New York before America entered the war; the man who, as musical director for the dancers Vernon and Irene Castle, had introduced the country to the fox-trot. He had joined the army in 1915, he told a friend, not out of any special sense of patriotism or because he was especially fond of martial music, but because he thought a National Guard unit for Harlem would "bring together all classes of men who stand for something in the community" and he would have felt remiss if he were not part of it. 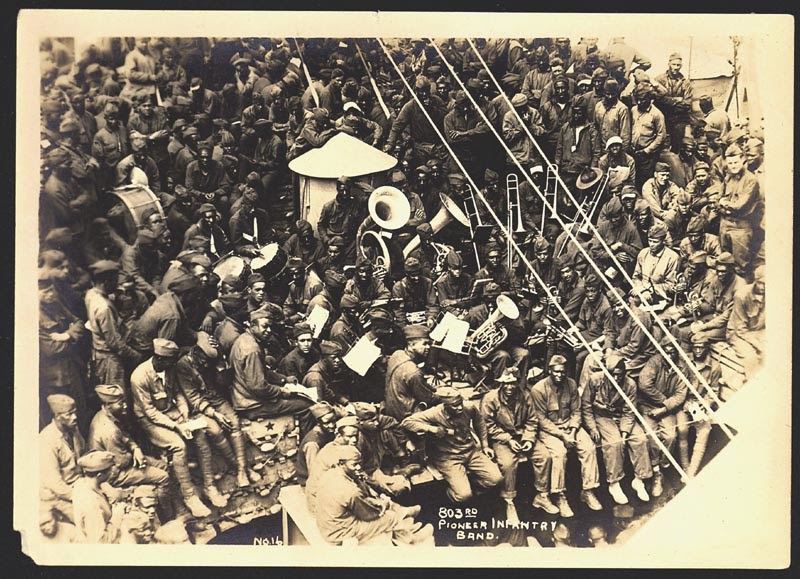 A Red Flag in the Face of a Bull

The regiment had first been sent south for training, to Spartanburg, South Carolina, over the strenuous objections of the city's mayor. "I was sorry to learn that the 15th Regiment has been ordered here," he told the press, "for, with their northern ideas about race equality, they will probably expect to be treated like white men. I can say right here that they will not be treated as anything except Negroes ... This thing is like waving a red flag in the face of a bull, something that can't be done without trouble."

On the first Saturday after the regiment's arrival, Europe's band played a concert in downtown Spartanburg. A big muttering crowd of local whites gathered. The next day, however, members of the Spartanburg chamber of commerce came calling. Would the band be available to play to dancing the following Saturday at the country club?

Europe's music may have mollified some white citizens of Spartanburg, but others continued to be angered by the presence of black troops. In the interest of keeping the peace, the men pledged to follow Jim Crow practice whenever they went into town and to do their best to look the other way when insulted. But white troops from other New York units training nearby had made no such promises. They berated shop owners who wouldn't serve their fellow soldiers, whatever their color, and when a black doughboy was assaulted for failing to leave the sidewalk fast enough to suit several lounging whites, white New Yorkers beat his attackers to the ground. Then, when the proprietor of a downtown hotel knocked a black private down for having failed to doff his hat before buying a newspaper in the lobby, officers had to restrain angry white troops from burning the place down. Finally, it was thought best to have the regiment's training completed in France, where, their commander assured his men, there was "no color line."

Not long after the Europe band came ashore in France, Army brass saw that its brand of martial ragtime would be good for morale, providing "the feel of home" for bored or battered doughboys, while winning new friends among the French. The songwriter Noble Sissle, who served as the band's vocalist, remembered its first appearance before French civilians, a Lincoln's Birthday concert at the Nantes opera house. The men played French marches, The Stars and Stripes Forever, plantation melodies, and ragtime pieces, which the French had never heard before. Then came "the fireworks," Sissle wrote, W. C. Handy's Memphis Blues; it began with a "soul-rousing crash" of cymbals by the drummers, their shoulders shaking in time, then "both director and musicians seemed to forget their surroundings ... The audience could stand it no longer, the 'jazz germ' hit them and it seemed to find the vital spot, loosening all muscles and causing what is known in American as an 'eagle rocking it.'"

The music Europe's men played was still orchestrated ragtime meant for marching, not jazz, and no one was allowed to improvise. But it was filled with jazz elements — breaks, riffs, trombones smears, and rhythmic excitement no other marching band could come close to matching. The British and French and Italian bandmasters were impressed, too, and asked to examine the instruments Europe's men had used; they couldn't believe that such sounds could be made through ordinary horns. It was not the instruments his men played, Europe patiently explained, but the way they played them that made the difference.

On the night of April 20, 1918, Europe became the first African-American officer to face combat during the war, accompanying a French night patrol across no-man's-land under heavy enemy fire. Six weeks later, he survived a German poison gas attack that left his lungs too weak for further fighting but failed to dim his creativity. Lying on a hospital cot he wrote a new song, On Patrol in No Man's Land, then arranged it for the regimental band with special effects — sirens and alarm bells, artillery explosions, and rattling bursts of machine-gun fire, all to be produced by the band's two drummers.

Meanwhile, the men of the 15th New York — its name now changed to the 369th Infantry Regiment, U.S. Army — endured 191 unbroken days of combat, won 171 decorations for bravery, more than any other American unit, and took special pride in the name the French gave them — the Hellfighters. After the fighting was finally over, they came home to New York on February 17, 1919, to a victory parade up 5th Avenue to Harlem. Thousands of New Yorkers, white as well as black, poured into the streets to cheer them. "Never in the history of Father Knickerbocker," one newspaperman wrote, "has such a rousing royal welcome been given returning heroes ... Not for many a day it is likely that thousands of white and colored citizens will participate in such a tumultuous and enthusiastic demonstration."

World War I proved one of the bloodiest and most brutal wars in history, with 10 million people killed, and some 20 million wounded from 1914-1918. The carnage was unspeakable. As historian Bernd Huppauf explained, soldiers suffered "horrific wounds that were inflicted by modern ammunition. There were soldiers who returned who had suffered psychological shock ... They were not even capable of functioning in the society at the end of the war." The world had entered a new, mechanized age, one in which the frailty of life was clearer than ever before. The slaughter forced inhabitants of every nation to question their philosophical and spiritual beliefs, and altered their perspective of the world.

In America, the war paved the way for what would one day be caricatured as "the Roaring Twenties," a period of fast living characterized by organized crime, corrupt politicians, speakeasies, and the wild, vibrant beats of a new music known as jazz.  [http://www.pbs.org/jazz/time/time_wwi.htm]