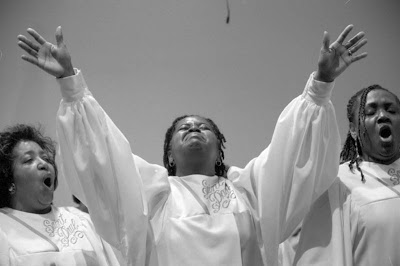 San Francisco Gate, "African American Watch Night Rings In New Year," 29 December 2008, by Wanda Ravernell: There are no party favors, no paper whistles, no shiny hats for these New Year's celebrants. They won't be greeting the new year with a Champagne toast while the ball drops in Times Square.

It will be joyful, but sober, especially during those last 10 minutes when the preacher stops preaching, the choir quiets down and those who are so inclined, get down on their knees and pray.

It's called the Watch Night service, a Methodist custom that African Americans adopted and adapted as a spiritual and political ritual during the time of slavery. It continues today around the nation and the Bay Area, with many remembering the most important Watch Night service, that of Dec. 31, 1862.

Skeptical that President Abraham Lincoln would keep his word about emancipation, African Americans, both free and slave, as well as abolitionists, prayed through the night and into the day. Abolitionist and former slave Frederick Douglass stayed at a church in Rochester, N.Y., until 10 p.m. on New Year's Day, awaiting a cable that assured him that the law had been passed.

"Our ancestors always believed that they would someday be free," said Lawrence VanHook, Laney College adjunct professor of ethnic studies and pastor of Community Christian Church, "We believed in our prayer, our watching in anticipation of what God would do."

The institution of slavery first showed signs of cracking with the U.S. ban on slave importation as of 1808. The Civil War brought an official end to the practice with Lincoln's Emancipation Proclamation of Sept. 22, 1862, to be effective as of Jan. 1, 1863.

In 1862, "there was a lot of politicking and resistance," to Lincoln's plan to free the slaves, said the Rev. Amos Brown of San Francisco's Third Baptist Church. "The slaves decided they would gather and watch through the night for the expectation of the dawn of a new day."

The Jan. 1 Emancipation celebrations began to die out in the North and far West at the beginning of the 20th century, but the custom of Watch Night persists

For some people, it's the only way to bring in the new year. "That's been my party for 61 years," says Pastor Ron Thomas, 61, of the Prayer Tower Church in Oakland. "We're praying out the old year, praying in the new."

"Watch Night, like all worship, is sacrifice," says Third Baptist Church administrator Sharon Haynes. "The significance is just thanking God for getting us through."

But in those perilous times that gave birth to Watch Night, gathering for prayer was also accompanied by a need to know how to navigate the changes. For each new law passed - from the abolition of the slave trade, to the fugitive slave laws and, finally, Emancipation, the year's start was when they determined a response to the news.

This year, the greatest good news to befall the African American community since the end of slavery came early: the election of Barack Obama as president of the United States.

"To make a parallel, (election night) was a lot like Watch Night," VanHook said. "We watched and we waited. We weren't sure he would win. So we watched to be sure."

And watching is not enough. "On the heels of Obama's election," VanHook said, "How do we respond? That's our assignment."

Taking his cue from the old Emancipation Day celebrations, VanHook is sponsoring "Witness to a New Day" a New Year's Day forum featuring Rep. Barbara Lee, to speak to the issues of the nation, and Alameda County Supervisor Keith Carson, to the state of the community.

Brown, who is planning a traditional Watch Night service, is cautiously optimistic about the significance of the election of an African American president.

The gap between dream and reality for African Americans since 1863 is still here, he says. "The masses of black people have not met the fulfillment of dreams prayed for on that Watch Night," he said, referring to Dec. 31, 1862. "Mr. Obama's presidency can go no higher in our agenda than the nation permits him to go."

Although Pastor Dion Evans of Chosen Vessels Christian Church in Alameda will use what he calls a combination of new-school and old-school prayer style when it comes to his own service, he is saddened that so few people are aware of the "Emancipation piece." Knowledge of "history is important for any people to succeed," he said. "(Watch Night) ties New Year into our accomplishments in the history of this country." (source: San Francisco Gate)
Posted by Ron at 8:01 AM