As reported by Beth Stebner of The New York Daily News, on 24 September 2013, in an article entitled"‘Ask A Slave’ creator Azie Dungey dishes on life as Lizzie Mae on Washington’s plantation," Azie Dungey, who now lives in Los Angeles, tells The News about playing 'Lizzie Mae,' a fictional character she made up after working several years as a period actor at Mt. Vernon, on the popular web series. 'The joke is on the 18th century,' she says.

Ignorance is no excuse, but it makes for a great comedy series.


Actress Azie Dungey, a graduate of New York University's Tisch School of the Arts, knows all about that. As a former character actor at George Washington's Mt. Vernon estate, she's seen and heard it all — including questions as to why she wanted to be a slave in the first place.

Dungey told the Daily News that she didn't expect the web series to take off like it has.

"Because there's just nothing like it, I didn't know if anyone would get this," she said. "There were a lot of concerns about making people laugh about slavery."

But the character of Lizzie Mae gives Dungey license to tread the line of comedy and history, of fact and fiction. The humor, she says, mostly comes from the questions. 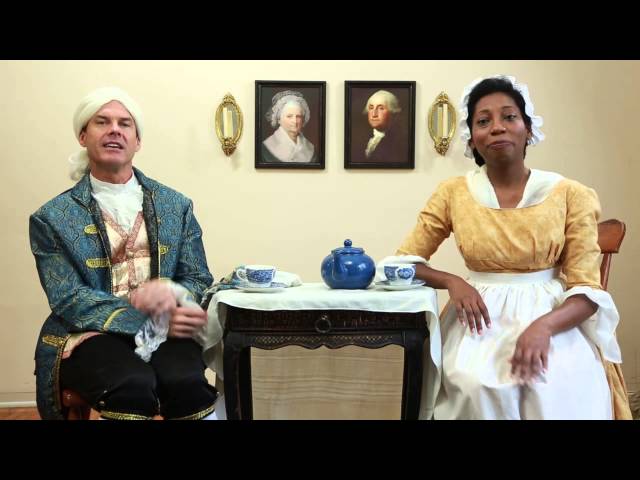 In episode 2 of 'Ask A Slave,' Lizzie Mae has a guest over for tea ... but little sympathy.
"The joke is never on a slave or their experience — the joke is on the 18th century," Dungey said. "Often, passive racism is the joke."

The episodes, of which there are now five, are set up in a Q&A format, with "guests" to Mount Vernon asking questions to Lizzie Mae.

A man in the first episode offers this gem: "How did you get to be housemaid for such a distinguished founding father? Did you see the advertisement in the newspaper?"
In character, Dungey responds: "I sure did. It said, 'Wanted, one housemaid. No pay. Preferably mulatto, saucy with breedin' hips. Must work 18 hours a day, seven days a week, no holidays. But you get to wear a pretty dress, and if you're lucky, you just might get carry some famous white man's bastard child.' You better believe when I read that, I ran over and said, 'Sign me up!'"

Often, it cuts back to the question-asker to get an uncomfortable reaction. Sometimes, they keep going, other times, they are silenced by Lizzie Mae's icy glare.

Azie Dungey in her period costume at the slaves quarters of Mt. Vernon, where she worked for several years as a part-time character actor.

Dungey told The News that it was important to get the character of Lizzie Mae just right, treading cautiously around stereotyped or offensive images of "mammy" figures.

"I wanted to make sure that Lizzie Mae has a lot of intelligence and dignity," she said. "As weird as it seems, I thought about my own personality, if I was living at the time and in that situation."

Dungey said that many of the questions she encountered while working as a character actor at Washington's plantation stemmed from ignorance, lack of education and general anachronisms.

For instance, one guest to Mt. Vernon asked her why Abraham Lincoln didn't just come in to free all of the slaves, or why the slaves didn't just escape through the Underground Railroad.
There are also a lot of misconceptions that Dungey uses for her series, such as "the perception is that house slaves had it better, because they're closer to the masters, but in some ways, they were more despised positions because of that."

Azie Dungey, who lives in Los Angeles, tells The News that she has plans for a second season of 'Ask A Slave.'

The series — which will continue into a second season of six episodes — wasn't meant to be entirely educational, Dungey said. "But I think because the subject is very unknown, it ends up being educational."

That gives some unexpected rewards.

"My hope with this is that people look more critically about how people talk about that time, this mythological time that people are nostalgic for, and that they have a more three-dimensional appreciation for it."

To Dungey, that includes valuing the African-American experience in the pages of U.S. history, because "it was essential to the founding of America."