Jewish Unsung Heroes: Joseph Goldberger and His Gift to the Southland 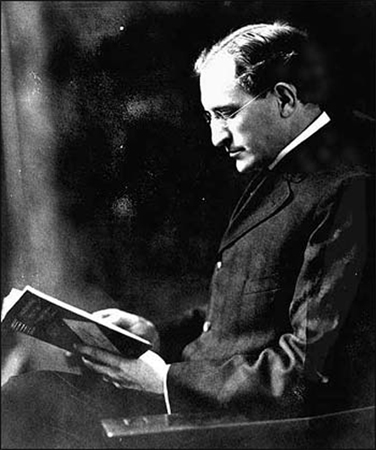 From Jewish Magazine, "Jewish Unsung Heroes: Joseph Goldberger and His Gift to the Southland, by Ted Roberts, from the August 2001 edition --  I wasn’t surprised the other day to see a list of the hundred greatest Synagogue Garbage Committee Chairmen of the millennium. (I was 59th.)

There are millennium lists of everything. The Rochester Jewish Ledger, in early January, ran a list of one hundred acclaimed Jews picked by the readers of the Jerusalem Report. Among significant notables like Einstein, Salk, and the Baal Shem Tov, there were Danny Kaye, Sid Caesar, Abbie Hoffman, and Marilyn Monroe (remember, she converted when she married Arthur Miller?). Small potatoes among the giants of Judaism, I say. Nowhere on the list was Dr. Joseph Goldberger.

Who was Joseph Goldberger, do I hear you ask?

Oh, only the medical researcher who cured Pellagra in the South. But his fame was a victim of his victory. Like a wound that heals without a scar - who remembers Pellagra? It is yesterday’s banished assassin - thanks to the good doctor.

So, don’t feel bad that you recognize Sid Caesar, but not Joseph Goldberger. Nobody else, outside of medical historians, has any idea of his gift to undernourished, poor people everywhere - but especially the rural South. He did most of his work in the 20’s - not a great economic decade for maintaining a balanced diet if you were a maid or sharecropper in Mississippi or layed around your room all day and thumbed through want ads because you were unemployed.

Paul DeKruif, the famous historian and popularizer of medical science, tells of Goldberger in his 1926 book - “The Hunger Fighters”. Goldberger was born in Austria, Hungary and came to New York with his family in 1881. After his medical education at Bellevue Hospital Medical College, he joined the Public Health Service - basically a band of "microbe hunters" as they were called. It was an exhilarating era in public health history. Syphilis, Typhoid Fever, and Tuberculosis were under siege. "Identify the bug and kill it" was their modus operandi.

In 1912, the Surgeon General took note of soldier Goldberger who was battling infectious diseases around the U.S. and the Caribbean. He assigned him to Pellagra, the “Scourge of the South”, which flourished like the Boll Weevil in Dixie’s cotton fields.

It was a killer of the poor. Gout was for rich folks, Pellagra fed on poor folks. And it fed well in those years. In 1915 thousands died in Mississippi alone. The good doctor took a long look around the South before he unpacked his laboratory test tubes. Pellagra stalked the land hand-in-hand with poverty.

It’s host was poor folks whose diet had three major elements; cornbread, cornmeal, and corn on the cob. Maybe sweetened up with molasses for Sunday dinner - or an entree of white lard. So, contrary to his "microbe hunter" philosophy, the Jewish researcher decided that there was no bug - no infectious side to this malady. You didn’t catch it by sharing a bologna sandwich with Betty Lou McElhaney. It was a failure of nutrition. He noted that eating cornbread, molasses, and pork fat practically invited the disease into your ill-nourished frame. And, with a keen Talmudic eye he registered that institutionalized orphans fell victim, but the staff who had a separate dining room, was as healthy as a show hog at the County Fair.

In 1915, with the permission of the governor of Mississippi, he conducted a landmark experiment at Rankin Prison Farm down in Mississippi. The control group were fed the typical diet of the Southern poor, while the experimental group lapped up meat, fresh vegetables, and milk. As he suspected, the malnourished inmates came down with Pellagra. 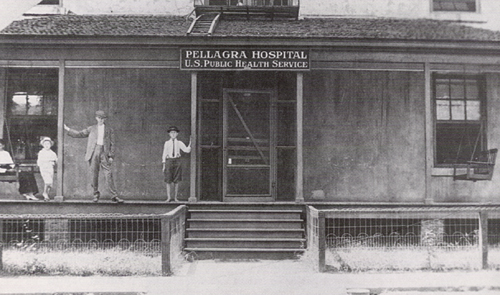 Goldberger announced his discovery; the medical community, obsessed with infectious diseases, snickered. He didn't spend much time debating the issue. Instead, he injected himself, his wife, and assistants with Pellagra-tainted blood. In all, he played Russian roulette seven times with self-induced Pellagra. But it never took. He and his staff thrived on a balanced diet.

Finally, Goldberger discovered that a daily yeast tablet - cheap enough for the poorest of the poor - would defeat Pellagra. After his death in 1929, it was found that the missing nutritional element was Niacin; both a prevention and cure. A nice gift to the Southland from a Jewish doctor.

If I made up a Jewish millennium list, after placing my wife around 20th I’d put Dr. Joseph Goldberger somewhere after Einstein, but stratispherically above Abbie Hoffman, Marilyn Monroe, and that crowd. (source: Jewish Magazine)

Goldberger and the "Pellagra Germ"

Joseph Goldberger's theory on pellagra contradicted commonly-held medical opinions. The work of Italian investigators as well as Goldberger's own observations in mental hospitals, orphanages, and cotton mill towns, convinced him that germs did not cause the disease. In such institutions, inmates contracted the disease, but staff never did. Goldberger knew from his years of experience working on infectious diseases that germs did not distinguish between inmates and employees. Lombroso had speculated that spoiled maize caused pellagra.

Goldberger found no evidence for that hypothesis, but diet certainly seemed the crucial factor. Shipments of food which Goldberger had requested from Washington were provided to children in two Mississippi orphanages and to inmates at the Georgia State Asylum. Results were dramatic; those fed a diet of fresh meat, milk and vegetables instead of a com-based diet recovered from pellagra. Those without the disease who ate the new diet did not contract pellagra. [http://history.nih.gov/exhibits/goldberger/docs/pellegra_5.htm] 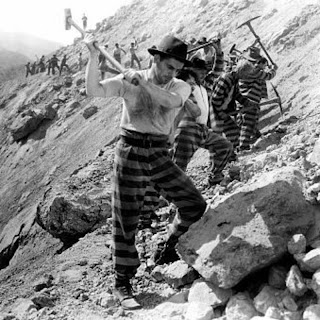 Critics, many unable to part from the germ theory of pellagra, raised doubts. Goldberger hoped to squelch those reservations by demonstrating the existence of a particular substance that when removed from the diet of healthy individuals resulted in pellagra. With the cooperation of Mississippi's progressive governor, Earl Brewer, Goldberger experimented on eleven healthy volunteer prisoners at the Rankin State Prison Farm in 1915. Offered pardons in return for their participation, the volunteers ate a corn-based diet. Six of the eleven showed pellagra rashes after five months.

Expert dermatologists made the actual diagnosis of pellagra to avoid the appearance of a conflict of interest on Goldberger's part. Although many scientific colleagues sang Goldberger's praises, even mentioning a Nobel nomination, others still doubted. In the pages of the Journal of the American Medical Association, critic W.J. MacNeal challenged the results. One Birmingham physician referred to the experiment as "half-baked." Still others thought the whole experiment a fraud. [http://history.nih.gov/exhibits/goldberger/docs/pellegra_5.htm]

Angry and frustrated, Goldberger would not give up trying to persuade his critics that pellagra was a dietary disorder, not an infectious disease. He hoped that one final dramatic experiment would convince his critics. On April 26, 1916 he injected five cubic centimeters of a pellagrin's blood into the arm of his assistant, Dr. George Wheeler. Wheeler shot six centimeters of such blood into Goldberger. Then they swabbed out the secretions of a pellagrin's nose and throat and rubbed them into their own noses and throats. They swallowed capsules containing scabs of pellagrins' rashes. Others joined what Goldberger called his "filth parties," including Mary Goldberger. None of the volunteers got pellagra. Despite Goldberger's heroic efforts, a few physicians remained staunch opponents of the dietary theory of pellagra.  [http://history.nih.gov/exhibits/goldberger/docs/pellegra_5.htm]